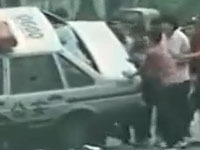 In recent years there has been an increase in ethnic tensions in Xinjiang Uygur Autonomous Region. Representatives of the Muslim minority residing here (40 percent of the total mass of 20 million people, mostly Uighurs) are increasingly opposed to the Chinese rule in Xinjiang.

According to the spokesman of the World Uighur Congress Dilshata Rashi, who is in exile in Germany, a surge in violence is caused by the suppression of Uighurs by the Chinese government, which is reflected in the ban on protests and mass migration of Han people to the land of Uighurs.

Earlier in July, just in the city of Hotan 20 people were killed in an attack on a police station. Even more bloody events occurred two years ago, when in July of 2009 in the regional capital Urumqi Uighur militants attacked the Chinese. Then approximately 200 people were killed, and 1,700 wounded. Beijing is trying to actively fight the manifestations of the local "separatism," and despite the protests of the West does not skimp on the death penalty for those associated with radical Islamic movement of "East Turkistan" based in neighboring Pakistan, and those who proved themselves as "terrorists."

What caused the rise of tension in the Chinese region, and is there a chance for those fighting against the central government? Experts Evgeny Khakimullin and Heidar Jemal answered these questions in an interview with "Pravda.ru."

Evgeny Khakimullin, sinologist: "The local separatists have no chances for the separation of Xinjiang Uygur Autonomous Region. Beijing's policy is so wise that the majority of the Uighurs and the local Muslim population do not seek independence. In recent years the central government has been investing large amounts of money in the development of this earlier underdeveloped in all respects suburbs, and now we see the result.

I personally visited the Urumqi area. It is the largest city in Central Asia with the population of three million. Tashkent, with its 2.5 million people, is inferior to it in many ways. In particular, in terms of business activity. The economic capital of Central Asia is Urumqi. In many ways the Chinese made it this way.

The majority of the local population has no motivation for a rebellion, because they do not feel the apparent infringement of their rights in neither cultural nor material respect. Only a small group of radicals that enjoys foreign support rebels against Beijing's policy. It should be noted that it became particularly active at the moment of the highest development of Sino-Pakistani relations. For some people further strengthening of China's position in Pakistan is not advantageous, and therefore anything that can stop this process is being used. "

Heidar Jemal, chairman of Russia's Islamic Committee: "Xinjiang is going through very complex processes associated with the ongoing central government policy here. In fact, Beijing is conducting a deliberate policy of cultural genocide in the area. If earlier it was expressed by attracting the local intelligentsia, seduced by grants and sent to study in the major cities in the east, now this process is even more pronounced.
Now the central government intends to further weaken the separatist moments here at the expense of relocation of Han and deportation of non-Han. Take, for example, grandiose plans to create five cities with 20 million people each in Xinjiang.

However, it would be wrong to mix the issue of the Uighurs and Muslims in general. The Uighur issue has national rather than religious grounds.

The total number of Chinese Muslim non-Turks (including Dungan) amounts to 200 million people. Their number is constantly growing due to the adoption of Islam by the new Han. This process is greatly affected by the establishment of the business interests of the businessmen in the Middle East and North Africa, where China has recently become very active. The Chinese staff of the companies where there is adequate guidance is also influenced and is gradually converting to Islam.

China cannot ignore this and conducts a very complex multi-layer policy in this respect. On the one hand, it can be characterized as a policy of "wide-open embrace," because from outside China seems to have welcoming conditions for the Muslims. In this seemingly pagan country with Confucian and Buddhist heritage, each five-star hotel has a prayer room and everything necessary for the practice of Islam.

On the other hand there is harsh suppression of the Turkic "separatism." Beijing is worried by the presence of the Turkic states next door and prospects of creating Xinjiang and the Great Turkestan. The processes that occur in the newly independent Central Asian republics are reflected in the west of China, inhabited by Turks. Therefore, it is trying to take measures in advance.

However, there are doubts that the attempts to solve the Uighur issue through deportations would lead to positive results. As it happened many times in history, it can only lead to further consolidation of the nation".