A few words to the killers from NATO 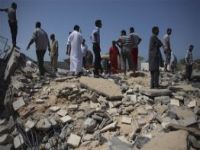 A few words to the killers from NATO

I reiterate my appeal to NATO pilots: How many kids, old people, women did you kill today? How many people have you made homeless? How many have you dismembered and mutilated? How many have you deprived of food? How much are you paid per hecatomb? Is this money enough to remove you from the face of the Earth so that you are not to be found and executed for crimes you committed.

Your Commanders convince you that by killing you make the world more secure for your country and you believe it. You are slaughtering for NATO Commanders, for Corporations which demonstrate a burning desire to appropriate other country's resources. Do you realize that you arouse hostility and stir up hatred for your country?

Try to imagine your country under bombardment and you are told that this nightmare is happening for the sake of "democracy" but in reality it is because the attackers want the victim's resources.

Imagine that shops and plants are destroyed and you have no place to earn money to feed your kids and your kids are deathly frightened because yesterday the neighbor's home was bombed by NATO jet-fighters and they saw the broken, bloody dead bodies of their friends and you try to comfort your kids' grief. You can only shake your fists at the fighter-jet and the aggressor-nations pilots just laugh in response to your powerless fists.

Imagine that after removing the wreckage of someone else's home a couple of days ago, the next evening when you come home, you don't find your own home and you realize that the bodies of your wife and kid's body are just fragments in a mortuary.

I reiterate my appeal to NATO soldier's mothers, their wives, sisters and daughters: do you understand that he is a mass-murderer? An assassinator assigned by your government to terrorize another country?

Why don't you hold a moment of silence in memory of civilians killed by NATO soldiers, like now you held it in memory of those killed in Norway?

Are you aware that the entire Libyan nation - men, women, old people, kids - millions of them every day organize rallies on squares of their cities under green banners and with Muammar Gaddafi portraits? That every Libyan capable of holding a weapon has volunteered in self-defense squads in case of a ground invasion?

That armed civilians in Benghazi and Tobruck fight under green banners with rabbles of so-called National Transitional Council and hitmen squads from Europe and US PMKs?

Are you aware that NATO is bombing Libyan residential areas with depleted uranium bombs like they did in Serbia? Did you know that NATO uses napalm and CW agents in bombs? That western governments and corporations are testing new weapons on defenseless Libyans, on purpose, to kill as many as possible, and to force survivors to surrender?

Are you aware that now NATO's bombs are not only destroying schools and hospitals but food warehouses and the Libyan water supply system of the Great Man Made River? This is in order to starve Libyans and kill them via lack of water.

Now imagine all this happening to you.

Stop your Governments from killing people for the sake of greed of gold.

NATO pilots - you are not heroes! You are not saving the civilians, You are saving only a group of bankers and corporations. You are without morals, without emotion, as well as your superiors.

You know very well what your aircraft damages, whom it kills and that makes you the heinous murderers! Yes, you are just disgusting murderers and mercenaries of oligarchs! Maybe you and your family once will experience the bombing first hand and remember how you bombed civilians in Libya. And you admirals, generals led by war criminal Rasmussen, you deserve only what al Qaeda is making now in Benghazi to Libyan innocent civilians. One day the justice will find you!

I wonder do NATO pilots have children of their own?

I wonder do they have wives. I wonder what they are telling to their families.

Do they say: "Hi honey! I am home! I killed some people but I make it to come to dinner".

Do they tell their little daughters or sons: "Come to daddy baby. Today daddy blew with a bomb one baby cute like you!"

I can't imagine how they can come home after what they've been doing in Lybia?

I wonder why NATO soldiers wives accept killers in their beds.