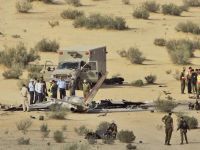 The Arab Bedouins of the Negev Desert have, predictably, been treated worse than dirt by the Israeli authorities, which deny them their rights to their lands, cynically taken from them through manipulation of the law and deny them the right to build settlements. The reaction is Recognition Now!

The treatment of the Arab Bedouin living in Israel's Negev desert is pretty much a mirror image of the absence of respect demonstrated for the human being by representatives of the Israeli authorities elsewhere, namely in the lands which Israel occupies against international law, after stealing them from the Palestinians.

To protect the Arab Bedouins from the inhumane and inhuman treatment meted out by the Israeli authorities, leaders of the Bedouins have set up a platform called Recognition Now, a Committee for the Rights of Arabs in the Negev, their ancestral lands.

Recognition Now claims "This committee includes Negev representatives of all Arab parties, leaders from the unrecognized villages, NGOs and community activists. Its aim, as its name indicates, is to protect and promote the rights of the Arab-Bedouins of the Negev".

Its objectives are to guarantee the recognition of the unrecognized villages, the right to resources allowing an honorable livelihood, the right to villages planned to meet the community's economic and cultural needs, the right to their lands, and the right to dignity as citizens with equal rights.

The organisation says: "Recognition Now calls out to the Government of Israel to take measures concerning the integration of the Arab-Bedouin community of the Negev into the region based on the principles of partnership, equality, human rights, and a future of prosperity for all the Negev residents".