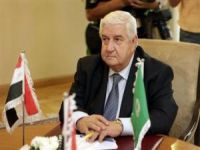 "We reject any foreign interference. We [the Syrians] we can reach common ground despite differences of views. No one should impose on us overseas points of view," Moallem said.

For the Foreign Minister, the position assumed by the Europeans provokes the natural forgetfulness of them on the part of the Syrians. "We are going to forget that Europe is on the map," he said.

Moallem accused some European ministers of participating in a "conspiracy to sow chaos and conflict in Syria" after they criticized the speech last Sunday (20th) by Assad. For some aides of the president, the tone of the speech was insufficient. "As has been said it may be insufficient to reform or amend the Constitution," responded the Foreign Minister.

He also accused the Foreign Minister of France, Alain Juppe, of maintaining "colonial illusions". He said Juppe has no influence in Syria. Moallem also denied that Iran and the Shiite Hezbollah movement support the regime's crackdown on demonstrations in the country.