Desomorphine, drug for the poor, kills all of its victims 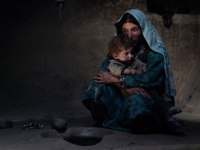 The police of the city of Ufa found a drug nest in one of the city apartments. The police found a pregnant woman and two young mothers in a state of strong narcotic intoxication in a common city apartment in Aurora Street. Investigators have determined that the flat was used for the production of one of most dangerous drugs - desomorphine, which is known in Russia as 'crocodile'. Unlike heroine, the drug is available to practically anyone. The ingredients for the production of desomorphine can be bought in a common drug store without any prescriptions. A person, who becomes addicted to crocodile, usually begins to rot alive.

The owner of the apartment, a 28-year-old man, has been arrested. The man told the police that his flat became a drug den about a year ago, soon after the death of his mother. He started drinking because of depression, but vodka only made it harder. The man was afraid of committing suicide, and a friend of his told him to try desomorphine, a medicine commonly known as krokodil (crocodile). The man started taking the drug and then befriended other people who were also addicted to krokodil.

When the female addicts came to their senses, the police interrogated them. It turned out that the oldest of the women was not even 30 years of age. As a rule, desomorphion turns addicts into elderly people very quickly. A person, who starts taking it, loses a year of his or her life with every dose.

One of the women said that she was visiting the apartment in Aurora Street every day, going there from across the city. Her ten-year-old son was accompanying his mother during her every visit to the drug den. While the woman was taking a dose, the boy was waiting for her outside.

The women had been doing the drug for a little more than a year. All of them said that before desomorphine they would sometimes smoke marijuana just for fun. It is generally believed nowadays that pot is not a drug. They smoke marijuana in many developed countries - at schools and at respectable parties, just to have fun. However, as drug addicts say, those who smoke pot for the first time, stand in a long like for heroine.

This is exactly what happened to the arrested women. After marijuana, they decided to take hashish and heroine. They wanted more and more. When they ran out of money, the women had to choose the "drug for the poor" - desomorphine.

Practically every drug addict is aware of the situation they find themselves in. As a rule, they want to bid farewell to their addiction. Those women from Ufa were no exception. Medics could not do much to help the women. One of them eventually decided to join the Ufa division of Russia's Transformation organization.

The organization positions itself as a rehab for alcohol and drug addicts. However, the organization has earned the reputation of a totalitarian sect in the country. When joining the organization, addicts become subjected to violence and different forms of humiliation on a regular basis.

A member of the organization's program, a drug addict, died in one of its rehabs in the spring of 2009. The activity of the organization was suspended in November 2010, although several of its regional divisions continued working as if nothing happened.

One of those divisions was opened in Ufa. The above-mentioned woman came to the center in a hope to escape from hell, but she found herself in a different form of hell instead.

Anatoly Berestov, Doctor of Medical Sciences, a celibate priest, said in an interview with Pravda.Ru that desomorphine drug addiction was legal in Russia.

"It is legal, the state sells this drug in drug stores. One can go there and easily buy codeine medications that people take when they have headaches or cough. Drug mafia buys those drugs in huge quantities. People can buy that easily.

"Desomorphine is widely spread in Russia nowadays. It is much more dangerous than heroine or other types of opium drugs. A heroine addict has a chance to become cured of his or her addiction - it is possible in 3 of 100 cases. Desomorphine kills all of its victims and it kills them very quickly. A heroine addict may live up to six or seven years. The life of a desomorphine addict is much shorter - two years maximum. Some may take it for five years, but many people die after taking their first dose of this drug.

"This is a terrible drug, and the state must do something to save young people from committing mass suicide," Anatoly Berestov said.