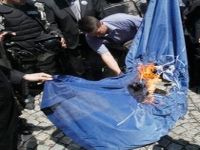 The North Atlantic Treaty Organization (NATO) agreed to close seven of its headquarters and operations centers as part of an adjustment to reduce costs, but their war policy remains unchanged.

In a recent meeting at the Brussels headquarters of the Alliance, the 28 defense ministers also decided the military bloc would reduce its workforce by 36 percent.

Among the bases that will close is the Retamares headquarters (Madrid), one of only two land component command centers of NATO in Europe.

Also closing is the enclave in Heidelberg (Germany), and the Naval Station located in the southern Italian region of Naples. The measure includes, as well, the shutdown of the joint command in Lisbon and the transformation of the air base at Izmir, Turkey, another land component command center.

These reforms, planned since June 2010, during the NATO summit held in Lisbon, reflect a decrease of about 13,000 headquarters positions according to a statement from the Alliance.

The restrictive plans come amid strong criticism from political and military analysts as a result of the large amounts allocated to the defense budgets in all Western countries, while other items are reduced because of the global economic crisis.

Despite the reforms, the military bloc persists in maintaining its armed incursions.

One of the most recent taking place is in Libya, under UN protection, in order to overthrow the country's leader, Muammar Gaddafi.

According to the secretary general of NATO, Anders Fogh Rasmussen, the allies will continue to bomb Gaddafi loyalists and "all that is necessary to achieve a quick end to the crisis."

To that end, the defense ministers gathered in Brussels in early June, and confirmed the decision to extend the operation 90 days, when a deadline of the 27th of this month was initially set.

On the other hand, Rasmussen asked the 28 members not to take a hasty retreat from Afghanistan once the U.S. begins to repatriate some of its military contingent in July. All countries remain committed to operations in that country, said Rasmussen.

The invading troops in the Central Asian nation exceed 130,000, including about 100,000 from the U.S., in addition to participating contract personnel, estimated at more than 70,000.

Secretary of Defense of the United States, Robert Gates, admitted that the absence of contributions by some NATO countries could compromise the effectiveness of its mission in Libya.

There is little political will and contribution of military assets by some countries allied to the operation against the North African state, said Gates.

Along that line, the Pentagon chief criticized some members who just limited themselves to alleged humanitarian operations, while others are responsible for combat missions.

Rasmussen also coincided with these findings, admitting that the decline in defense spending in member countries threatens to debilitate the Alliance.

"If Europeans do not put their hands in their pockets, we risk creating a two-tiered alliance," said NATO's supreme authority.

He found that differences in the financing would create a gap between the technological capabilities of U.S. and those of other NATO members, which would affect subsequent actions.

Recently, NATO asked that members send more military resources to strengthen the armed operation against Libya, but that demand fell on deaf ears as several allied states refuse to extend their contribution, and others shuffle to withdraw their current one.

Of the 28 allied states, only nine are involved in the bombing of the North African country.

Some of them committed themselves to sending fighter jets, but are not engaged in the military offensive.

Norway, for example, wants to recover its six F-16s at the end of this month.

On the other hand, Spain has rejected pressure from the United Kingdom when assuring that they will not expand their contingent or military equipment deployed in Libya.

An opponent of the invasion, Germany said it will continue regardless of the operation, although it might take part in a civilian mission, said Christian Schmidt, official of the German Defense Department.

In these circumstances, the Alliance may face a bleak future in Libya if part of its membership gives up investing sufficient military resources at a time when the block is involved simultaneously in two military campaigns: the North African nation and Afghanistan, without an imminent solution.

(*) The author is a journalist for Prensa Latina.