Obama running out of time on Libya aggression

Obama has five days to get Congressional authorization for the intervention in Libya and must answer for armed actions in Libya before Sunday. 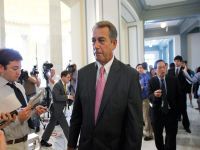 The United States House of Representatives on Tuesday demanded an explanation from the president, Barack Obama, on the operations that the country is taking in Libya and warned that failure to get congressional authorization for these actions before Sunday could be violating the War Powers Act.

The Speaker of the House of Representatives, John Boehner, explained in a letter sent to the White House that the Government must obtain authorization or cancel the operation in the African country, otherwise it is in violation of the regulations.

''It seems that within five days the administration will be in violation of the War Powers Resolution if it doesn't ask for and receive authorization from Congress or withdraws all troops and U.S. resources from the mission," expressed Boehner.

The highest authority of the House asked Obama if he had made a "legal analysis" of the situation to justify the actions in Libya due to the "gravity of the constitutional and statutory questions" involved the situation.

The War Powers Act aims to establish the powers of the president and Congress in military interventions.

This legislation was passed in 1973 during the tenure of President Richard Nixon (1969-1974) over the veto of the head of state.

The resolution prohibits the U.S. military from being part of a military operation for more than 60 days without congressional authorization, and if authorization is not given, a period of 30 days to withdraw troops.

The United States House of Representatives, on June 3rd, approved a resolution which demanded President Obama produce details of the actions of the Armed Forces in Libya, amid a war not sanctioned by Congress. The representatives also demanded the immediate withdrawal of troops from the African country.

Last March, Obama notified the Congress of U.S. military involvement in operations in Libya, nevertheless, he did not ask authorization from that entity to carry out this intervention.

Among the backers of the White House is Sen. John McCain of Arizona, a leading proponent of military action against Gadhafi, Obama's presidential rival in the 2008 election. McCain warned his GOP colleagues against any steps that would send a positive signal to Gadhafi.

"I caution my friends, both here in the Senate and in the House of Representatives, that we don't want to do anything or pass legislation which would encourage Gadhafi to remain in power," McCain told reporters.

Representative. Dennis Kucinich, D-Ohio, said he and Representative Walter Jones, R-N.C., will file a complaint in federal court Wednesday over the Libyan war.