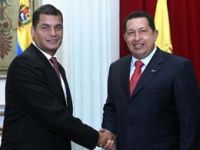 Venezuelan President Hugo Chavez said on Tuesday (7th) that the United States suffers from an "imperial madness" which, he says, is demonstrated in the attacks on countries like Libya.

"Rarely have you ever seen or experienced a bombing of a country to, quote, 'protect civilians,' when the bombs precisely hit everybody," Chavez said to the press upon his arrival early on Tuesday in the Ecuadorian city of Salinas, where he will meet with President Rafael Correa.

Chavez has questioned the strategy of the North Atlantic Treaty Organization (NATO) to indiscriminately bomb Libya and denounced that the they have sent helicopters to hunt down and kill the Libyan leader, Muammar Gaddafi.

"What we're seeing today is the height of cynicism," Chavez said, adding that the sanctions imposed by Washington on the Venezuelan oil company PDVSA for selling gasoline to Iran, "are part of this imperial madness."

Chavez thanked the governments that have shown solidarity with Venezuela after the U.S. sanctions and emphasized that the attempts by Washington to destabilize Syria and other Middle Eastern countries cannot be applied in South America, "They are not going to manage to destabilize Venezuela or Ecuador or Bolivia, not even Brazil or Argentina," declared the leader.

"They cannot force their kind of independence, sovereignty and freedom on us," he added.  At the meeting with Correa, Chavez revealed that besides revising the status of agreements between Ecuador and Venezuela, the two leaders proposed to strengthen binational as well as Latin American integration. According to him, the goal of integration is to create a region of peace, democracy and human development."