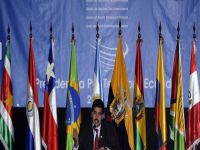 The 86 political parties of the left in Latin America attending the Forum of Sao Paulo, condemned this Friday in Managua, Nicaragua, the "wild NATO aggression" against Libya and demanded the United Nations (UN) form an international commission to end the armed conflict.

"The Sao Paulo Forum strongly condemns NATO's aggression against the Libyan people, with the consequent killing of innocent civilians," the Forum expressed in an official statement read and adopted by over 150 delegates on the last day of a three-day event in Managua.

The Forum warned that "the savage wild aggression of the North Atlantic Treaty Organization against Libya represents a flagrant violation of the democratic charter of the UN and challenges the role of this organization to a future."

The resolution calls for "an immediate end to military action in Libya and to organize a national dialogue so that sovereignty is upheld without interference, and the Libyan people may decide their own future."

The leaders of the Latin American left expressed their support for the peace initiative put forward by the African Union "to resolve the conflict" and suggested supporting these efforts with the "creation of an international commission under the United Nations Organization (UN)" formed by the African Union, Arab League and the European Union.

The initiative was promoted by the ruling Sandinista Front, of Nicaragua, at which Daniel Ortega presides, an ally of Libyan leader Muammar Al Gaddafi. It was endorsed and backed by representatives of leftist groups and parties that were present at the meeting.

The African Union announced that next week they will hold a special summit to discuss the conflict in Libya.

At the conclusion of the Forum, the TeleSUR correspondent in Nicaragua, Adriana Sivori, added that "2011 is an election year in many countries for several leftist parties and it is intended to reinforce these parties so that in the next election they go out winning again and return so that social projects can move forward."

They discussed "strengthening economies, and fair trade among Latin Americans since it is a continent with a large part of its population living in poverty. The idea is to make a just economy in Latin America because the land is idle, and it is necessary to sow it because ultimately it is necessary to sell those products to countries that need it."

The correspondent expanded that "besides rejecting the invasion of Libya, the group gave full support for the return to Honduras of President Manuel Zelaya (...) and that it is expected on May 28. Finally, next year this forum will be held in Venezuela, where it also is an election year."

This information was confirmed Friday by the representative of the Latin American Parliament (Parlatino), Rodrigo Cabezas, who said that the plenary session of the Forum unanimously decided that the next meeting of this international event, in 2012, will be held in Caracas, capital of Venezuela.