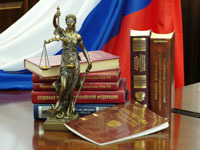 A hideous story has recently took place in the city of Omsk, Siberia. A 62-year-old woman came to a local police station and said that she had just hacked her husband with an axe. The elderly spouses had a family fight, the woman said. The man grabbed an axe, but the woman managed to take it away. She then hacked her husband to death seven times.

The police arrived to the woman's flat and found the body of her 60-year-old husband with his head smashed to pieces. The woman did not hide any detail of her crime. It took investigators quite a time to decide what kind of charges can be brought against the woman. She killed her husband as she was trying to defend herself. The woman was eventually charged with murder. She was later released in her own custody. The woman may face a serious criminal punishment if she does not prove that she was trying to save her own life.

Unfortunately, exceeding the limits of acceptable defense is a frequent matter in Russia. Below you can find a number of examples.

In Russia's Amur region, a criminal case was filed against a woman who killed her husband. The couple was drinking alcohol together, when a fight erupted between them. The man started beating his wife and threatening to kill her. The woman was struggling back and grabbed a kitchen knife. She stabbed the husband in the chest once, and the man died on the scene. Investigators concluded that the woman exceeded the limits of required self-defense and killed the man.

In Norilsk, a 20-year-old prison inmate killed another inmate and exceeded the limits of required defense as well. The victim was a convicted pedophile: he had been jailed for raping a little girl. The fight between the inmates erupted in a smoking room. Now the pedophile's murderer will have to spend more years in prison.

In the Yaroslavl region, a court sentenced a local entrepreneur Nikolai Gartsev to one year in jail for exceeding the limits of required defense. The man shot racketeers as they broke into his home. One of the assailants died.

Lawyer Igor Shmidt told Pravda.Ru that cases related to the use of excessive force are usually extremely complicated.

"From my practice I can say they usually try to pass such cases to highly experienced judges only. Nevertheless, anything can happen. Responsibility for exceeding the limits of necessary defense was removed from the Russian Penal Code on December 16, 2003. According to current laws, a person shall not be called into criminal account for exceeding the limits of necessary defense if his or her actions were taken after an unexpected attack and if a person could not estimate the extent of the danger.

"The measures used in self-defense must be adequate to a threat. For example, if an attacker was wielding a baseball bat, and a victim took hold of the bat during the fight and subsequently killed the attacker with the bat, it will not be qualified as necessary defense," the lawyer said.