Qaddafi's Libya is not Obama's Libya

"Below the parliamentary assemblies, the Age of the Masses live, direct democracy, the Third Theory" 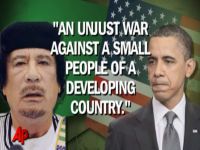 The greatest deceiver of mankind, a major liar, who fooled the American people to elect him U.S. president, who was so stupidly and recklessly awarded with the Nobel Peace Prize, Barack Obama, was the first black president to order the bombing of Africa.

In speeches at the White House to tame and corrupt Western media, Obama speaks of a Libyan who he says he knows, because he only has information falsified by Zionists who dominate and control the media and the U.S. banks.

Praying in the book of criminal leeches and the international financial system, Obama is just a stupid puppet, controlled by unknown forces, ordering  criminal actions that will ultimately put the planet in critical condition.

The first time I traveled to Libya was in the distant year of 1985. At the time, I was a student activist and idealistic. I saw a country proud of its freedom. I remember watching the inauguration of housing developments planned by the leader Moammar Gadhafi for poor people who roamed the deserts of Libya, who lived in tents or tarpaulins on the outskirts of Tripoli.

In the years that followed, I returned to Libya several times and saw a country thriving, growing and progressing each year, despite the boycott, the international campaigns against the country orchestrated by U.S. imperialism and by Israeli Zionism.

After all this time, decades and decades of resistance, the Libyan people had built a strong and sovereign nation, internationally respected, in solidarity with peoples fighting for liberation. This is the Libya of the Gadhafi whom I have met. I walked the streets of Tripoli, Benghazi and Sirte, and I talked to people, I drank the true facts at the source, not the daily lies of western media.

I saw an opportunity in this booming country, constructing modern beautiful buildings, able to rival the most modern buildings of the UAE.

A sovereign, socialist, progressive and rich nation, led by a man who never surrendered to imperialism or Zionism, but rather always fought, was unacceptable for governments who align themselves with imperialism, Zionism and criminals to steal and expropriate the wealth of nations: France and England.

Obama's Libya is the illusion and the lies of a ruler who does not see an inch ahead. Barack Obama is not a Malcolm X or a Martin Luther King. He never had any deep knowledge of the reality of the people. He has always been a puppet of American political parties, funded by the oil and war industries - the biggest ones interested in promoting world wars.

Qaddafi's Libya is building a sovereign, free and independent country. It is the Bedouin who after winning the challenges and hardships of deserts, invades the cities with his ideas of freedom, his tent challenges the most powerful weapons in the world, to say loudly and in a clear voice: "Parliamentary democracy is the falsification of true democracy, below the parliamentary assemblies, the Age of the Masses lives, straight direct democracy, the Third Theory."

Qaddafi's Libya is the people happy, the owners of their freedom, owners of their own home, their land, a partner in the company where they work. It is something that is beyond the comprehension of Obama, who has no culture, intelligence or ability to understand the philosophical advances practiced and taught by Gaddafi. But Obama is president of the most powerful country in the world, despite his political ignorance.

The difference between Obama and Gaddafi is that Gaddafi's ideas never die: they simmer around the world in most of the countries and they will build the histories of people who advance in their struggles for liberation. Obama will be a forgotten name in the dustbin of history because he was put at the service of selfishness, of capitalism, to murder defenseless civilians in various countries, where criminal industries steal oil and he lives in order to encourage and favor capitalists and Zionists.

* José Gil is a Brazilian journalist