Crimes against humanity continue for Colombia

Yes, in Colombia there are State crimes, crimes against humanity 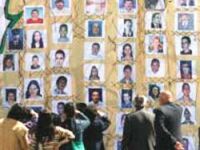 An interview with colleagues who are part of the Movement for Victims of State Crimes (MOVICE) Chapter Bogotá: Carlos Eduardo Parra Santos, Flor Luz Munera and Odilia Ramírez León

1. There is a workshop on MOVICE in Ibague. What is your opinion?

My concern is that we must continue with this task, making visible and denouncing the criminal acts that we are still experiencing with victims of State crimes, because State crimes exist in Colombia, crimes against humanity, and the Tolima as a whole national geography, has many victims. In fact, there has not been a single corner of the country that has not remained without being a victim and re-victimized.

We have prepared this workshop to continue making visible, sensitizing people not only to the victims, but the Colombian people and the international community, and to continue organizing social organizations, popular, peasant and trade unions that the state itself has been destroying by war, the terrorism of the State. Our task is to reconstruct it and to continue to resist and confront the neoliberal model that has to be changed to benefit all of Colombian society.

2. How does MOVICE emerge and develop in Colombia?

The movement for victims of the State, MOVICE, arises through all the historical processes of war that have been implanted in Colombia. After so many crimes have been carried out in our country, going so far as to dismantle people's organizations and trade union organizations of political opposition to the neo-liberal regime of the State, victims and survivors are scattered throughout the country and even outside the country because many have had to go into exile to avoid persecution by the government. There has been the need to support those victims in this difficult tragedy, those seeking an organization and its justice so that it will not go unpunished, nor to repeat such painful acts.

After much investigation, it is found that the victimization is systematic, focused and directed from the highest echelons of power in Colombia, with the purpose of exterminating any project of political opposition or mere expression of dissent or protest by the Colombian people.

3. What are the strategies outlined by MOVICE to meet its goals?

The strategies emerge after an arduous study, because in reality it blankets many fields that need to be concatenated so that the response to this harsh reality be comprehensive and not half-way, as proposed by President Santos.

These are: Legal, truth and memory, integral repair, no repetition, alternative land registry, fight against political genocide, exhumations, organizational strengthening and demanding the return of exiles to the country.

There is a painful reality: In Colombia impunity prevails, everything was done in silence, without knowing that there is a constitution and international treaties in which we indicate that we have rights which it should be required to demand in such a way so that these abominable acts are not repeated and the persons in charge are punished.

4. With the national government of Juan Manuel Santos Calderon, has respect for human rights improved or is it still the same?

It has not improved, it remains the same. I believe what Santos has done is to make up a policy of democratic security, because we know that the policies of Uribe were monstrous. Uribe himself was a monster as it is said by a real history that remains hidden. Santos comes and now he wants to appear as the savior of the nation and his speech also focuses in that direction in which the human rights situation has supposedly improved. But it is not true. Simply review national daily events and realize that State crimes against humanity continue without being reported by the mass media.

This is the case also with the paramilitaries. It continues. Only the government has given other names to them such as emerging bands and gangs, BACRIM (bandas criminales emergente), but in fact paramilitaries and militarism are still present within the same political project designed by the capitalist system that it imposes on Colombian society. So I do not see the human rights situation having improved in Colombia. The killings, threats, displacements, etc. continue.

We have a recent case in San Vicente del Caguan, Caqueta, where they just threaten teachers, students, grassroots organizations, peasant leaders and human rights defenders, with calls, leaflets and intimidation. The same is true in Putumayo, Arauca, where the reality in this country can be looked upon. Also the members of MOVICE, the same victims again, that is to say, the reality - I think - has been further complicated by this Santos government.

5. What has been the acceptance by Colombians of the proposed MOVICE?

MOVICE is a very young movement, barely six years old. However, we have been gaining ground with the Colombian people. We have earned respect and a little tolerance, thanks to firm and consistent work. Of course, there are difficulties, for example, the individualism that is so common in capitalism, the signaling and stigmatization that are so common in the establishment. There are social groups that identify and brand us as subversives and friends of the rebellion.

But the strongest attack comes directly from the same State and its repressive and intolerant apparatus. I repeat: on the part of the State we continue to be identified and re-victimized. There are colleagues who for denouncing and doing their part for MOVICE are in jail, with horrific groups, saying that they are guerrillas, helping the guerrillas, etc. Human rights defenders remain in prison, such as the case of Carmelo Agamez, part of the MOVICE Sucre department, supposedly accused of being a paramilitary when he is a survivor of the Patriotic Union. The same happens with Miguel Angel, another human rights defender, etc.