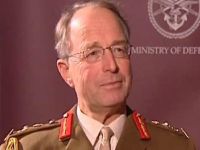 On Sunday (15th), the Libyan prime minister, Baghdadi Mahmudi, presented a new truce offer in exchange for an immediate cease-fire by the forces of the North AtlanticTreaty Organization, NATO. The proposal comes to the surface at the time that the conflict in Libya enters its third month and it was done with the special envoy of the UN (United Nations) to Tripoli, Abdul-Ilah al-Khatib.

Quoted by the state news agency, Jana, Mahmudi said after a meeting with Al-Khatib, that Libya is ready for "an immediate ceasefire to coincide with the end of NATO bombing and the acceptance of international observers."

Al-Khatib is trying to find a political solution to the conflict. During talks with the Minister of Foreign Affairs, Abdelati Al-Obeidi, he was informed of the magnitude of the abuses and serious violations committed by NATO in the country. The Libyan prime minister also accused NATO of political assassinations, a naval siege, bombardment of civilian areas and destruction of the infrastructure of Libya.

On Sunday (15th) amid the offer of a truce, the commander of British armed forces, General David Richards, defended NATO and encouraged it to intensify its military campaign to ensure that the Libyan leader, Muammar Gaddafi, does not continue in power.

This Sunday NATO itself confirmed that it had attacked Libyan army positions near Zawara, on the border with Tunisia, an area that several sources claim has turned into an increasingly extensive battlefield.

A dispatch from the official Tunisian news agency TAP said Western planes bombed the barracks and radar installations in the Libyan city of Boukamache on the border, and explosions were heard in the nearby border crossing at Ras Jdir.

Given the climate of tension in the area, the army of Tunisia remains on a state of alert in Ras Jdir since last Saturday, after a blackout on the Libyan side, TAP reported.

Rejecting the offer of a truce from the government of Gaddafi, early on Monday (16th), NATO aircraft attacked an oil facility at Ras Lanuf and other areas of the capital. The new bombings also included the suburbs east of Tripoli, where a radar facility was partially destroyed, informed residents of the Tajura district which is 15 km from the capital.

A radar station, located between several houses, was destroyed in Tajura. Residents said they heard three loud explosions. Other explosions were heard further to the east.

Tajura is home to several military installations and radars. The neighborhood is attacked almost daily by the imperialist coalition.