Obama, Osama and the new barbarism

The American crusade and the lessons of Nuremberg 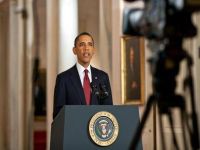 The children of bin Laden - in a statement published yesterday - accused the U.S. of violating the immemorial principles of justice, such as due process, by killing the head of household in Abottabad. Clearly, they demand a United Nations investigation into the facts and admit taking the case to the International Court of Justice. A group of British lawyers was already contacted.

They argue that they have always been against the acts of their father and, as they condemned them, today they condemned the killing of an unarmed man, who could have been trapped alive and taken prisoner, like many others, to a legal trial.

The idea is clear: if President Obama has violated the principles adopted by the international community and the conscience of men, such as others who have violated them and were subject to trial, he should be treated the same. Admittedly this will not happen. Since the world exists, they are only really punished eventually by the the weakest courts.

The great French Catholic intellectual and dissident François de Menthon, the French prosecutor at Nuremberg, spoke about two outstanding phrases at that time. In one, he defines what a crime against humanity is, "crime contre le statut d'être humain, motivé par une ideologie qui est contre l'espirit, visant a rejeter l'humanité dans la barbarie" (crime against human laws, motivated by an ideology that is a crime against the spirit, returning humanity to barbarism. The definition served at that time, but we always have difficulty in defining which ideology is against the spirit and aims to bring humanity back into barbarism.

Since each of us has an ideology, it is normal for us to defend our own and we reject those that oppose it. The other Menthon phrase is more effective as an aid to reasoning. When everyone was smiling at the stupidity and nonsense of Nazi slogans and ideas, the Frenchman said, with lucid skepticism: "We consider such slogans ridiculous and stupid, but if they had won the war, we'd be repeating them, and in some cases, with enthusiasm."

It is with enthusiasm that many people repeat the many arguments of Washington, which boil down to one: by having sufficient force to impose democracy made in United States and its peculiar exegesis of Human Rights, Obama has done right by invading a foreign country, going there to kill some unarmed people, hijack a corpse who must be buried by relatives, and threaten, covertly, sovereign countries and other enemies, of acting likewise, if deemed necessary. It is with this type of enthusiasm that the vehicles of communication in the world and some statesmen and academia have responded, in most cases.

Those that prophesy new barbarism in man haven't been in short supply since the Enlightenment. This barbarism would be based on the technological application of the discoveries of science and the myth of efficiency and progress. This sad and prophetic vision, which was admirable in its formulation in Vico, almost took place under Nazism, during the war with its organization and management of near perfection, the examples of which were the concentration camps. And while we are speaking of Nuremberg, the substitute for Francois de Menthon at the end of the trial, Champetier de Ribes, was accurate in his final pronouncement:

"The historian of the future, as the columnist of today, will know that the work of twenty centuries of a civilization that believed itself eternal escaped collapsing by returning in a new form of ancient barbarism, more savage, because it is more scientific."

We still do not escape from the barbarism that threatens us, the "unique thought" and the arrogance of a nation that considers itself the lady of Western civilization, with the complicity of its large and small vassals. Faced with that, only the reaction of men and women of the world (who still remain human for us) will be able to save the best of our historical experience.