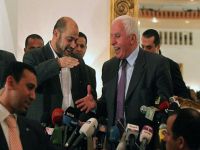 A ceremony took place in Cairo, on Wednesday May 4th, to mark the reconciliation of Fatah, which governs the West Bank, and Hamas, which controls the Gaza Strip. The agreement provides for the formation of a provisional government and is the first step to end four years of political division in the Palestinian territory.

The text did not include crucial issues such as control of security forces and relations with Israel. At least nine other Palestinian factions participated in the signing of the agreement, including the movements Islamic Jihad, the Popular Front for the Liberation of Palestine (PFLP), Democratic Front for the Liberation of Palestine (DFLP) and the Palestinian People's Party.

The Israeli prime minister, Benjamin Netanyahu, has criticized the pact. "The agreement between Hamas, which calls for the destruction of Israel, and Fatah, can only cause concern to the Israelis and all those that, worldwide, aspire to reach peace between us and our Palestinian neighbors," he said.

According to Professor Luiz Alberto Moniz Bandeira, a PhD in political science and historian with over 20 published works, the main fear of Israel is the joining of Hamas and Fatah in the struggle for recognition of a Palestinian state. "Everything indicates that this reconciliation will enable the realization of a white intifada.

On May 15th, called the Nakba, which means disaster or tragedy, the Palestinians recall the date on which about 725,000 Palestinian Arabs were expelled from their homes during the war with Israel in 1948," said CartaCapital. "Every year Palestinians have demonstrations and it seems that nowadays, the idea is to hold a peaceful demonstration, with thousands marching, or perhaps a million Palestinians marching up to Jerusalem in order to demand independence of the Palestinian state."

The expert notes that Israel has a population of 7.6 million inhabitants, of whom 5.7 million are Jews and almost 2 million are Palestinians. Together, the Gaza Strip and West Bank have a population of over 3.3 million Palestinians. "If Palestinians unite and march together in peaceful demonstrations to demand the recognition of a Palestinian state, the equivalent of a white intifada, that would leave the Israeli government in a difficult situation. The state would be without moral and political conditions to use military force to suppress them," adds Moniz Bandeira, honorary consul of Brazil in Heidelberg (Germany).