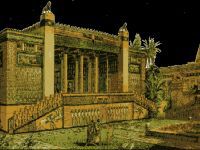 by Beto Almeida, director of Telesur

I just returned from Iran integrating a delegation of journalists and bloggers. One observation is immediate: a sophisticated and complex negative image was built of Iran to the world, which serves to justify all UN sanctions against the country, under the clear manipulation of the great powers. With the 1979 Islamic revolution, they lost the privileges they had over the vast energy resources in Iran.

We know the flow of information worldwide is under control of the media conglomerates of the imperialist countries, which operate in coordination for the interests of the defense and oil industries. The supposed "War on Terror" has already built a budget of 1.2 trillion dollars in the U.S.A. Bin Laden fulfilled his role, "alive or dead."

It is in this world that Iran is. They have more than enough reason to defend themselves. They are the main target of U.S. interests in the region. Especially for their independent development process. The nationalization of oil produced enormous effect on the use of their revenues to diversify the production process. Iran was forced to confront a war that they did not declare against a US-backed Iraq. They suffered economic sanctions at UN hands, had to learn to walk on their own legs themselves. They now possess an advanced defense industry, and manufacture their submarines themselves.

Iran has a modern aerospace program and is preparing to launch its first cosmonaut into the cosmos in 2012. There is a very advanced agriculture there, despite the desert. Railroads cross the country. Advanced research is performed in biotechnology and in the area of ​​stem cells. In other words, it is a rapidly developing country, whose enemies want to sabotage them and present Iran as a land of darkness.

We speak of human rights also, clearly, in a broad dialogue with the Deputy Foreign Minister, Behrooz Kamalvandi. "Both Iran and Brazil need to correct human rights. But who else needs to be corrected is the U.S. They attack human rights worldwide," he said, while highlighting the importance of countries like Brazil and Iran joined together in this gloomy world state of affairs. Yes, there all the women wearing veils. But we did not see children abandoned on the streets begging.