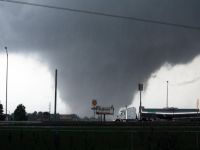 In what is being called the worst tornado outbreak of all time, heavy storms and tornadoes left at least 263 dead in the southern United States, reported officials on Thursday. Bad weather, which began earlier in the week and intensified on Wednesday, left 128 dead in just the state of Alabama alone.

Since the beginning of the week, there were reports of deaths in other states such as Mississippi, Arkansas, Louisiana, Georgia and Tennessee.

On Wednesday, President Barack Obama approved disaster relief to Alabama, including assistance for search and rescue. "While we cannot know the extent of damage for several days, we will continue to monitor these serious storms across the country and be ready to continue helping the people of Alabama and all citizens affected by these storms," ​​said the president in his statement.

The governors of Alabama, Arkansas and Tennessee declared states of emergency.

In Alabama, the city most affected by the storms was Tuscaloosa, where 16 deaths were recorded. The bad weather also left one hundred wounded in the city, which has about 83,000 inhabitants.

"The city suffered extensive damage from a tornado that left a trail of destruction deep in the heart of the city," said Mayor Walter Maddox, in a statement.

Tuscaloosa residents were startled by the strength of the storm. "I was with my wife reading the newspaper when a huge tornado 'fell' on us," said the resident, Will Nevin. "We were running to the bathroom. The lights were flashing and everything shook."

According to a spokesman of the Alabama energy company in the newspaper The New York Times, the storms that were already hitting the city had several days ago caused even worse damages provoked by tornadoes. He said about 335,000 households were without power in the region, and the total number of power outages can match those caused by hurricanes Ivan and Katrina.

In other states, the destruction is also great. In Arkansas, tornadoes and floods caused fallen trees and power cuts. Homes were destroyed and many areas are flooded. In Missouri, hundreds of residents were forced from their homes after the breaking of Black River dams, located near Poplar Bluff.

According to the National Weather Service, the forecast is for a brief lull on Thursday and Friday before the arrival on Saturday of a new storm system.

The southern U.S. has suffered from similar storms earlier this month. Two weeks ago, 47 people had died after storms hit the states of Oklahoma and North Carolina.

With the latest round of storms, this April may turn out to be a historic month for tornadoes in the country. It is possible by the end of April records will be broken with more than 300 tornadoes. The record for deaths has already been broken at 263, the deadliest in 40 years.