Who cares about human rights in Africa's largest oil producer? 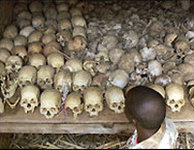 The situation in the largest oil producer in Africa - Nigeria - is developing in part according to a similar scenario with Côte d'Ivoire. After the release of the preliminary results of the presidential elections in the country, clashes broke out. There are hundreds of killed and wounded. The army was brought in to prevent riots. In some places there was shooting in the air, but the violence is still ongoing.

The situation is exacerbated by the fact that the protégé of the northern Muslims and former military dictator Muhammadu Buhari lost to the protégé of the Christian southerners. As soon as it was announced that the acting president Goodluck Jonathan won with a wide margin, the Muslim youth hit the streets. Its arguments were as follows: the election was falsified because Muslims are the majority of the population. According to various estimates, their number ranges from 50.5 to 55 percent, while Christians make up 35-40 percent of the population. Moreover, not all representatives of the traditional cults supported the protégé of the Southerners.

Major events took place in the northern city of Kaduna and the town of Jos located in the central part of the country. News agencies inform that aggressive youth began trashing snack shops belonging to representatives of different confessions. Two churches suffered in the riots.

Jos is traditionally one of the most problematic areas of Nigeria. Due to the fact that a Chinese company is developing tin deposits in the area, the region attracts contracted workers of different confessions, which causes frequent clashes between them.

It is hard to say what the current confrontation between Muslims and Christians will result in. Of course, much will depend on the behavior of the parties. So far the reports state that Bukhari did not admit his defeat. However, he urged his supporters to remain calm. It is unclear if he will be heard. The problem is not only in his supporters, but also in the behavior of the authorities, as well as the ability of politicians to conduct a dialogue. This is a well-known issue in African countries.

In addition, the Muslims and Christians have a great deal of claims to each other. During the clashes of 2008 and 2010 in Joes alone, according to official numbers, 1.2 thousand people were killed. The total number of victims of this undeclared religious war, according to Lagos, exceeded ten thousand.

The situation is complicated by the fact that in numerous outbreaks of violence mosques and churches have suffered. It is believed that this was the work of radical organizations such as the Islamist group "Boko Haram."

However, one cannot rule out that these clashes are provoked by the authorities that benefit from the fact that various categories of disadvantaged people let off steam fighting against each other. After all, the vast majority of Nigerians (the income of 70 percent of the Nigerians is less than one dollar a day, another 22 percent make one to two dollars a day) are living in poverty, regardless of their ethnic or religious affiliation.

This is despite the fact that Nigeria is one of the richest countries in terms of resources. Approximately 2.2 million barrels per day is exported from here (before the crisis in Libya less than 1.6 million barrels of "black gold" was obtained in the country). In recent years, deposits of nonferrous metals such as tin are being actively developed. However, the proceeds from the sales of raw material resources are placed in the pockets of innumerous elite.

Increasingly more voices calling for equitable redistribution of the resources. Due to the fact that the authorities do not particularly listen to this, there are a few groups in the country that do so by force of arms. The most famous of them are militants of the Movement for the Liberation of the Niger Delta, periodically attacking objects of Chevron, Shell and other foreign oil companies.

Another seven percent of the population is a sort of "servants" who get crumbs from the table of their masters. The World Bank estimates that only one percent of the population of Nigeria really enjoys oil revenues. The elite enjoys the lifestyle similar to that of the Western middle and even upper class. In the capital of the country one can see luxury foreign cars, a variety of glamorous parties and fashion shows. There are entire "business class" neighborhoods that cannot be found even in many well developed countries.

The elite enjoy iPhones and nightclubs. The Nigerian elite managed to outdo the elite of other countries. Take, for example, the famous Nollywood, uniting several film studios of the country. If the proceeds of the shows (up to $150 million a year) are still in the third place after Hollywood and Bollywood, in terms of the number of the movies released (1200) Nigerians are already ahead of the rest of the world.

However, the topics that concern the Nigerians are very specific: love and prostitution, witchcraft and bribery. This is not accidental, for it reflects the real problems of the country.

After all, one step away from this world of the chosen ones obscurantism, dirt, poverty and squalor prevail. It is sufficient to see what the local media is talking about. Articles about the merits or another masterpiece of Western automotive industry are published along with the facts of slaves rescue and the murder of "witch children" in some evangelical Christian community.

Is ethno-confessional peace possible in this country? The probability of achieving it is no higher than that in any other African country. This does not have to do with the fact that over 300 people live in the country, divided into 2,350 different groups. It is believed that since obtaining the independence the authorities have traditionally been Muslim northerners (mainly representatives of the peoples of the Hausa and Fulani) who do not wish to yield control over the oil fields to the representatives of the people of Yoruba, who are Christians. However, as strange as it may seem, the religious factor here just gives an additional contrast to the conflict of interest and does not explain the causes of conflicts in Africa.

The main reason causing the conflicts on the continent is tribalism. In practice this means the division of Africa into separate tribes who are fighting for power solely in their own interests.

In addition, the very existence of rich natural resources in a particular country in the world does not mean prosperity for its people. However, it has to do not only with the specific African conditions and tribalism especially inherent in the Black continent. A similar situation when the elite concentrate the sources of wealth in its hands is observed in many third world countries.

This state of affairs is favorable for the West: the tribal elite who switched from beads and mirrors to the latest benefits of Western civilization is spending the proceeds from the sale of oil at the prices favorable for TNK on food, and the surplus is in most cases invested in the economies of the "Golden billion".

Few people in the West are bothered by the fact that very often the elite violate the notorious human rights. As practice shows, the Western powers intervene rarely and usually when there is a threat to the interests of Washington, London or Paris.