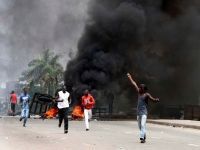 The Ivorian leader, Laurent Gbagbo, who refuses to leave the presidency of the Ivory Coast, was captured Monday after a raid on the presidential residence in Abidjan, the country's largest city. Gbagbo was arrested and taken to the Golf Hotel, the site used as the headquarters of the forces of Alassane Outta, internationally recognized as president.

One of his advisers said the arrest was made by French special forces, but the spokesman for the UN mission in Ivory Coast, Amadoune Touré, said that it was Outta Alassane's men who captured Gbagbo and his wife, Simone. Touré's information was confirmed by Ivorian TV.

Gbagbo and his family were refugees for days in an underground bunker of the presidential residence. The site had been attacked by French tanks and UN helicopters. UN peacekeepers accused Gbagbo's forces of threatening the civilian population of the country and asked the French troops to help combat Gbagbo's heavy weapons. 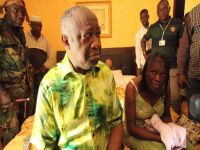 After the capture of Gbagbo, the United States Secretary of State, Hillary Clinton said that "dictators who cling to power suffer consequences."

The Ivory Coast was experiencing a political stalemate since the elections in November. Alassane Ouattara was recognized internationally as the winner, but Gbagbo, who disputed the re-election, claimed fraud and that the winner was auto-declared.

Since then, the country has seen clashes between supporters of both sides. In March, Outta forces launched an offensive from their stronghold in the north and took most of the Ivory Coast.

As their forces approached the stronghold of Mr. Gbagbo in Abidjan, French and UN troops began to fight Gbagbo's forces. Attempts to negotiate a solution to the crisis failed last week. According to the UN on Friday, Gbagbo's forces regained their lost ground in Abidjan, even threatening the Golf Hotel.

But, on Sunday, French helicopters and the UN returned and again attacked the presidential residence. Monday, French tanks were seen entering the site.

The crisis has forced the displacement of over 1 million people in Ivory Coast.