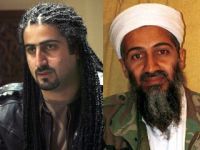 Emissaries of then-President Bush approached Omar Bin Laden in early 2009, in Qatar, to propose that he hand over his father, Osama, in exchange for protection in the U.S.

'I wanted to live in peace away from my father'

The son of Bin Laden says that Bush offered protection in exchange for information on the whereabouts of the terrorist leader, but his son denied knowing where he is

Omar Osama Bin Laden lived with his father, Osama, for 20 years - first in Saudi Arabia and then Afghanistan. Part of the time, the leader of al-Qaeda did not allow their (at least) 20 children (4 females) to study in school, and all that had a western touch - refrigerators, toys, stereos or air-conditioning - were totally forbidden.

Omar memorized the Quran and often participated in military training. In 2000, Abu Haadi, an attendant of the "number one terrorist," dared to reveal to Omar an important secret: "We are preparing a great secret plan (read the September 11) and so many of us will become martyrs. I recommend that you ask permission from your father to go away."

According to Omar, that was the last time he saw the leader of al-Qaeda. September 11, what he saw on TV became a taboo subject in this family of former peasants from Yemen who, thanks to oil, in two generations became one of the richest in the Arab world.

In 2006, Omar met British citizen, Jane Felix Browne. According to her, she is 26 years older than him. He fell in love with Jane and she converted to Islam, adopting the name Zaena.

When we landed in Doha, I called them by telephone. Omar booked a hotel, but once we there, they were not. His representative carefully studied us, and indicated to us the hotel where he was waiting for us. As he confessed, Omar is afraid of someone trying to kill him.

Finally the son of the leader of al-Qaeda appeared, dressed as a Saudi sheik, and his wife Zaena, was covered with a black veil in the style of the region. His blue eyes reflected great tension. "I left my father because I did not believe that these actions were correct, but I still miss him," he explained. Omar said he would attend the UN Alliance of Civilizations in December, in Qatar, to convey a message of peace. His business card says: "Omar Osama Bin Laden, general director of the Bin Laden Group, Qatar."

"Of course I'm not changing my last name. It's my pride," he affirms to me.

Henry Cymerman: It seems that in January of 2009 envoys of President George W. Bush came knocking on your door. What did they propose to you?

OMAR BIN LADEN: The representatives told me that they were from the White House. They would take me there to defend myself, to help and protect me, with the condition that I help them find my father. I told them I was sorry, but the way I feel, I do not behave in this way. He is my father and, in general, a good son wants good for his father and respects him. Although often as a person, one can be against the ideas of the father.

And what do you think of violence and terrorism?

OMAR BIN LADEN: As any human being would, especially a human being in my position, I do not support violence, fighting, attacks and these kinds of things. Only if they are carried out for a good reason and with the consent of big governments, and if they are seeking justice, as in Libya. For example, the UN uses troops in specific situations to achieve peace. In cases like this, in these circumstances, I am willing to get involved.

How did you feel after September 11? Where were you that day?

OMAR BIN LADEN: I do not want speak much about it. It happened ten years ago and I already said that nobody can agree with that. I do not know who is behind these attacks, period. It is a painful subject and I will not go into it again.

You said you want your father well, although you do not agree with him ...

OMAR BIN LADEN: I left the shelter of my father when I was 20 or 21 years old. I decided to get on with my life away from there. It has nothing to do with them. I wanted to return home, to live in peace, not to meddle in the lives of other people.

When there are terrorist attacks in different places on the planet, attacks in which innocent people die, how do you feel?

OMAR BIN LADEN: Innocent people die everywhere in the world, it is a fact. I feel the same for all the innocents who die in the world, whether Jews, Palestinians, Americans, Afghans, Iraqis, and it is not important to me what nationality or what government of the country is involved, I care more about people.

If your father heard your words, do you think he would be disappointed?

OMAR BIN LADEN: I do not have any message for my father. I am now living in my own world, and he lives in his world. And this is a difficult subject for me, I will not talk about it.

What can Omar Bin Laden do to stop the violence? Can you use the force of words to educate people not to use violence, not to practice terrorism?

OMAR BIN LADEN: It depends on the state of the country and people. Sometimes people use force because they have been uprooted from their homes. In such cases, what can you do? Tell them not to be violent? So you help those who attack them. In this case, instead, force must be used to stop the other side and fix the problem, and demand justice. But people who use force only because they want to control the whole world for no reason vainly go against human rights.

Do you believe your father is alive or dead?

OMAR BIN LADEN: I do not know, but I think he's alive.

You have received no message from him since he left the hideout?

Before, you justified the coalition attack the against the regime of Gaddafi, and it seems that you support the Arab revolutions ...

OMAR BIN LADEN: It can be seen that in many countries people join to overthrow governments (...). If the people do not want them, the leaders have two choices: to give way on what the people dislike or release everything and put someone that the people have chosen instead. But fighting against the people is not good.

If you could change your past, would you?

OMAR BIN LADEN: No. What happened, happened, and quickly. In December, the UN Alliance of Civilizations will meet in Qatar. I will put myself at their disposal if they want my services as an envoy to the Middle East. I know that in the name of peace the world has to get in motion. Just only one person, one individual alone can do nothing. If people do not unite, nothing will happen.