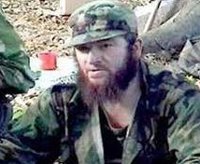 Doku Umarov, the leader of North Caucasus gunmen has most likely been killed in a special operation conducted in the republic of Ingushetia. Umarov was reportedly the primary target in the operation.

The process to identify the killed terrorists began on Tuesday morning. Russian news agencies reported that there were people from Umarov's team among the killed gunmen. "This gives us a reason to presume that Doku Umarov has been killed in the battle as well," a source from law-enforcement agencies of Russia's North Caucasus told Interfax. The identification has not been completed yet, and it is too early to officially confirm the death of the notorious warlord.

"It has been extremely difficult to capture and destroy Umarov because of peculiarities of the local area - mountains and forest. Umarov has been constantly changing his whereabouts as well. We hope that Umarov has been killed," the source told the Rossiiskaya Gazeta newspaper.

The head of Ingushetia, Yunus Bek Yevkurov, stated that there were indeed terrorist leaders among those gunmen killed during the special operation. However, the death of Doku Umarov has to be confirmed by investigators, he added.

"The whole group, as we hope, has been destroyed. We hope that no one escaped," Yevkurov said.

The special operation was conducted in the area near the borders of Ingushetia, Chechnya and North Ossetia. The area is said to be the location for the headquarters of the south-western sector of the so-called Imarat Kavkaz - a training camp for suicide bombers.

The death of 17 terrorists has already been confirmed officially. They have not been identified yet, but members of the special operation say that emir Khamzat, the head of the terrorist training camp, could be among the killed as well.

Nikolai Sintsov, an official spokesman for the National Anti-Terrorist Committee of the Russian Federation, stated Monday night that aviation of the Russian Air Force killed 17 terrorists in a pinpoint strike in Ingushetia. The special operation was conducted within the scope of the investigation of two explosions in the Moscow subway on March 29, 2010, which killed 40 people.