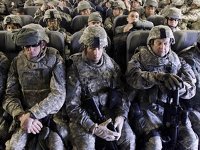 More than 20 American military men will face charges of tortures used against prisoners in Afghanistan. In addition to tortures, 26 servicemen of an army base in Afghanistan are suspected of involuntary murder, power abuse and failures to report crimes.

They are guilty of deaths of tens of POWs, which took place in December 2002. The investigation of those cases lasted for more than a year. It is not ruled out that the torturers will not be punished seriously for their crimes. Most likely, the defendants will simply be removed from service.

Jeremy Morlock, 22, was not so lucky. He was sentenced to 24 years in a federal prison Wednesday after pleading guilty to participating in the murder of three Afghan civilians last year. Morlock will testify against four other servicemen, who are also targeted in the investigation of the murders committed in the province of Kandahar from January of May of 2010.

Corporal Jeremy Morlock confessed to three murders. He threw a grenade at a boy in January 2010 before opening fire. He also admitted to murders in February and May 2010. Morlock said that every crime had been carefully planned and covered up. Photographs were taken during the crimes - the pictures were then distributed widely.

Two days before the above-mentioned trial, Germany's Spiegel published several photos of smiling US soldiers posing with the bodies of killed Afghanis.

David Petraeus, the commander of NATO forces in Afghanistan, condemned the behavior of the soldiers.

Meanwhile, foreign media discovered over 4,000 photos and videos depicting atrocities committed by US servicemen in Afghanistan. High-ranking officials at NATO and in Kabul compared the pictures to the infamous Abu-Ghraib photos, which triggered a wave of anti-American protests globally.

An independent committee investigating such cases concluded that it is the Pentagon that carries responsibility for them in the first place. Defense Secretary Donald Rumsfeld and his team failed to establish control over the prisons in Iraq, Afghanistan and Cuba.

In the middle March, Afghan President Hamid Karzai urged NATO to stop military operations in the country. Several days before that, US military men killed Hamid Karzai's cousin by mistake. "If foreigners see us as their friends, they should not kill their friends," Karzai stated.

In Afghanistan, they perceive the question of deaths among civilians very painfully. The above-mentioned gruesome photos were supposedly taken by the soldiers of an American military unit in Afghanistan in 2010.

In the meantime, American hawks call upon their president to send a restricted contingent of American military men to Libya. US defense officials believe that the presence of the US special forces in the troubled country is a necessary condition to overthrow Colonel Gaddafi.

One shall assume that we will soon witness another American intervention with new Abu Ghraibs, this time in Libya.