Another Shocking UN cover up about Libya

UN Weaving tangled webs of lies for imperialism in Libya 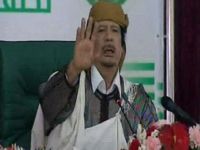 It still amazes that ordinary people are so much smarter than the people placed in charge of them. Anyone could have told the UN when the deliberations were being held exactly what the aims of the US/UK and France were in the demand to establish a no fly zone over Libya.

Your ordinary citizen knew it was just going to be an excuse to pound the living daylights out of the place, while the military and the freaks supporting them have orgasms at the scenes of destruction.

Your ordinary citizen knew it was to regain colonial domination over the region and to steal the country's rich plethora of resources.

The Anglo-French-American consortium leading this criminal activity has fallen for its own propaganda - blindly convinced that the Arab League is on board. If the Arab League totally approved without question, this means the crime is endorsed by the very people the Arab revolts are trying hard to get rid of.

Arab League chief Amr Moussa condemned the "bombardment of civilians" and called for an emergency meeting of the group of 22 states to discuss the Libyan issue. He demanded a report of the bombardment in which the Libyan armed forces command said 64 people, mostly civilians and children, were killed. Empire spokesmen accused Libya of lying, but the civilian casualties were confirmed by Russian citizens on site.

The abstaining countries also see they have been had in the most grotesque manner. NATO called a meeting and for all practical purposes the discussions have them eating each other alive.

The empire and its minions could not get rid of Ghaddafi by staging a revolt under the utterly absurd cloak of "peaceful protests" ("We are losing the information war" - Hillary Clinton. Ms. Clinton lies do not work when people are searching for truth) so they had to resort to bombs, violence, brute force.

Now comes to light another utter embarrasment for them and the UN, this one they can NEVER LIVE DOWN.

It just so happens that the United Nations Human Rights Council was scheduled to take another important vote. What was that vote?

The Council was about to vote on a report that affirmed and praised Libya and Colonel Ghaddafi for THEIR HUMAN RIGHTS RECORD. The report said that the Ghaddafi government protected "not only political rights, but also economic, educational, social and cultural rights," and praised it for the nation's treatment of religious minorities, and the "human rights training" received by security forces.

It was to be approved at a vote later this month. Did something suddenly happen over night? If you believe it did, I have a bridge to sell you.

No less than 46 delegations to the controversial Human Rights Council made positive comments, with rare criticism from, who else, the United States.

They have moved to postpone the vote. Anyone wonder why? Let everyone, particularly those in positions of power, take notice. We know why. How embarrassing for the dogs of war that vote would be if it were held honestly, no pressure, no blackmail, no bribes.  How embarrassing...first the best standard of living in Africa and now a commendation for human rights practices.  What a terrible dictator Colonel Ghaddafi is!