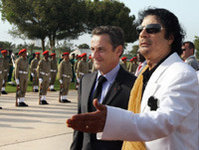 The aggression against Libya that began in the late evening on Saturday continues. NATO forces dominated by the Americans, British and French continue rocket and bomb attacks on Libyan territory under the framework of the operation Odyssey Dawn.

This did not come as a surprise to anyone. The West's plan to overthrow Gaddafi by the opposition has failed, and the countries of the "golden billion" directly started the aggression. They point out that the operation was sanctioned by the UN. Russia and China have abstained, and now the West is trying to use it in their interests. However, it is important to mention that the Security Council imposed a no-fly zone over Libya and did not sanction the bombing of that country.

It is no accident that secretary general of the Arab League Amr Moussa spoke against  Operation Odyssey Dawn. According to him, the West's actions did not match the originally stated goal of a no-fly zone and protection of the civilians.

The question arises as to why the Western powers that talk about peace for the Libyan people allegedly bombed by Gaddafi are destroying this peace themselves? Currently Tripoli has claimed there were 64 victims of the aggression, most of whom are women and children.

Numerous sources, including health care workers from Russia working in Libya, confirm this information. In particular, they point out that one of the cruise missiles struck the building of a hospital in Tripoli. This is not surprising as NATO high-precision weapons have already shown its effectiveness against civilian targets in Yugoslavia and bomb shelters in Iraq.

As in the case of an attack on Iraq and Yugoslavia, Libya faced several opponents. Western powers do not act one by one, which is not surprising, because the golden billion countries have the same goal - prosperity by robbing all the others and, above all, through obtaining cheap raw materials.

Yet, this time the attack had new elements. The French were the first ones to attack Libya. They are the most zealous of all the other participants of the aggression. In his desire to punish the "dictator oppressing his own people" Sarkozy' has surpassed even the Americans.

What is going on? We can certainly admit that he was angry over the fact that Gaddafi has recently refused to buy his fighter Rafale, opting for the Russian Sukhoi Su-35. According to various sources, the deal amounted to half a billion dollars. However, this is not the only explanation of the unexpected cooling of Sarkozy towards the colonel who was earlier welcomed by Paris as the dearest guest.

Experts Sergey Demidenko and Sergei Fedorov shared their thoughts in an interview with Pravda.ru.

Sergei Fedorov, a senior research fellow with the Institute of Europe, an expert on France: "It is no accident that Sarkozy has turned against al-Gaddafi. In recent years, the French public opinion has been strongly critical of his policies toward North African regimes. This is happening not only in relation to Gaddafi, whom Sarkozy heavily courted for signing of arms and oil deals, but also Tunis Ben Ali and Mubarak of Egypt. Many in France were greatly interested in things like the reasons of his purchasing a luxurious mansion in Egypt, or why Sarkozy until the last moment has supported Ben Ali and how he and his ministers have benefited from this?

The Tunisian affairs of the current French president had cost him dearly. As a result of the scandal concerning relations of his cabinet with Ben Ali a number of ministers, including Minister of Foreign Affairs, had to resign.

After Tunisia and Egypt, the revolt broke out in Libya. It would have looked bad if Sarkozy was reminded of his bowing before Gaddafi. Therefore, for him a small victorious war was a tool to make the public forget about the past. Fortunately, France has more than two centuries of experience as the champion of "liberty, equality and fraternity." Sarkozy is now appealing to these values, trying to act as a defender of the Libyan population allegedly subjected to genocide by Gaddafi.

Sergey Demidenko, an expert of the Institute of Strategic Studies and Analysis: "There are a few reasons that made Sarkozy run ahead of the American democratic "locomotive." First, it is oil and gas. This is not only that the production of Libyan black gold brings huge profits due to low production costs of the types of this resource highly prized in the West. And not only because at this point only a quarter of the geological map of the country has been researched.

The main reason that made the West try to eliminate Gaddafi is the fact that the latter used "oil weapon" for blackmailing purposes. Many European countries are dependent on the Libyan oil and gas, including France.

A year ago, Gaddafi threatened to deny oil to those countries that have been witnessed to disapprove of Islam. Now the policy under the ongoing crisis conditions is not favored by the West.

We must not forget that the Colonel was a difficult negotiator. He signed only the contracts with foreigners that were beneficial for him. However, the West needed the guarantee of uninterrupted supply of oil and gas on more favorable terms than those dictated by Gaddafi.

A rebellion against him was staged. The population generally supported it. That, however, is not surprising: it is enough to say that many preferred to just draw benefits than work. All this prosperity was provided to the people by Gaddafi. For this reason, in some few days his troops have moved the rebels to Benghazi and their protection was the reason for the intervention.

Not by chance, Sarkozy became the main proponent of the intervention. "Democratic society" vigorously criticized his connection with the North African regimes. It appeared as if France, the champion of "liberty, equality and fraternity," sold out for the money of the African tyrants.

Of particular interest are the former secret backroom dealings between Gaddafi and Sarkozy. The colonel has threatened to make public the facts of him sponsoring his election campaign. For Sarkozy in the present moment it is very, very unpleasant. At any case, so far he was not able to clarify the situation regarding the origin of the $50 million spent additionally. Whatever the case is, he will not forgive Gaddafi certain things."

For some reason, nobody rushes to strike at Bahrain and Saudi Arabia who are brutally suppressing Shiites riots on their territories and that really documented numerous civilian casualties. Apparently, France, like the U.S., has its own persons who are forgiven everything because the kings of the Persian Gulf have been playing by the rules that suit the West.