Gaddafi's son says Libya is not afraid of UN resolution 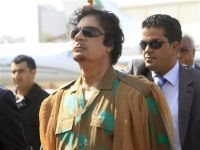 Appointed as his father's - the Libyan President Muammar Gaddafi - political successor, Seif al-Islam Gaddafi - said on Friday (18) that the government of his country has "no fear", after the adoption by the United Nations (UN) Security Council of a no-fly zone in the region. "We are in our country and with our people. And we're not afraid," said Gaddafi's son.

"They are not going to help the people if [you] bomb Libya to kill the Libyans. You will destroy our country. Nobody will be happy with that," said Seif al-Islam Gaddafi.

On Thursday (17) night with 10 votes and 5 abstentions the UN Security Council adopted a resolution establishing a no-fly zone in Libya and authorises "all necessary measures" to "protect civilian and populated areas "from attacks by forces loyal to the government of Libyan leader Muammar Gaddafi."

After the decision, the U.S. president, Barack Obama, telephoned French President Nicolas Sarkozy and Prime Minister of Britain, David Cameron, to coordinate military strategy to be executed in Libya.

In a statement the U.S. government reported that "the leaders agreed on the fact that Libya must immediately comply with the terms of the resolution."

Once again the imperialist countries instrumentalise the UN Security Council and put it in the service of their war policy, to undermine the sovereignty and territorial integrity of an independent country. At this hour, they do not use beautiful words. By invoking multilateralism to attack a people, those responsible for such a resolution in practice join with the unilateralism of an imperialist, increasingly aggressive condominium of enemies of world peace.

The United States and the other western imperialist nations are feeling increasingly aggressive and emboldened.  It's a dangerous time for the world if it isn't stopped now.  The ceasefire called is not enough, they keep pushing and pushing and pushing for more.  Give them an inch, they take a mile.  A lesson for those who appease them.

NATO's "peaceful" innocent civilians - they look like armed terrorists in the midst of an armed insurrection to me. 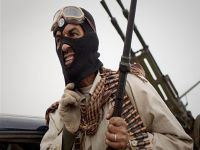