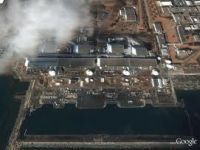 The chain reactions appearing to be going on beneath the reactors at the Fukushima Daiichi I nuclear plant have caused the Japanese authorities to inform the IAEA that they are concerned about the situations at reactors 3 and 4, where another fire broke out on Wednesday.

The earthquake on Friday March 11 damaged the power supplies to the plant, suppressing the response capacity of the cooling systems. The water boiled away, exposing the nuclear fuel in zirconium alloy rods, which reacting with the steam, gave off highly volatile hydrogen gas.

The explosions were caused by the hydrogen gas, upon release into the air to prevent a build-up of pressure. In addition to a partial melting of the rods, the explosion at reactor 2 may have caused damage to the suppression pool which could occasion a sustained release of radioactivity.

The latest turn of events has caused some experts to speak about a catastrophic situation: reactor 5 has started to heat up and the water levels are decreasing, while the pool storing fuel at reactor 4 (the cooling pond) is showing signs of criticality. Some say it could be boiling. Others say it has evaporated.

When we see a helicopter desperately flying over the reactor trying and failing to drop a pouch of seawater into it, and when we hear "the technicians are trying other things" we begin to imagine for the worse. Something is wrong. Under normal circumstances, the heat generation in nuclear rods, when power is switched off, reduces to 0.5% within 24 hours, the water cooling it and protecting the environment from radiation release.

But if, as the Tokyo Electric Power Company (TEPCO) has claimed, there is a possibility of re-criticality, this means that there could be enough fissile uranium present at a density sufficient to reach a critical mass and start a fission chain reaction.