Fukushima - How bad is it? 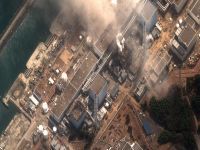 Tuesday. Another explosion - and a fire. If it is true that the interior casing of reactor number two has ruptured, and given that the concrete in question is built to withstand the impact of a direct hit from an aircraft travelling at 900 kph, what exactly is going on? Caesium and iodine, present in the steam, are by-products of nuclear fission.

A 30-kilometre no-fly zone, people advised to stay indoors within a radius of the same distance; a register of 400 millisieverts per hour (mSv/hr) when only 100 mSv/hr can cause cancer, according to the World Nuclear Association, and when the average exposure is 3mSv per year; 130 times the safe radiation level recorded at the Fukushima I plant; ten times the safe level in Tokyo 150 miles away; 200,000 people evacuated; a further 140,000 people told to stay indoors...this is hardly good news.

Worse news is the explosion at reactor number 2. Was this as more steam was released and the hydrogen that built up exploded? Or was it something else? Why was the explosion sufficient to crack (as it appears) the casing which is built to withstand the impact of an aircraft crashing into it?

The last thing the builder of a nuclear power plant expects is to be without electricity to drive the cooling system. The main system has a pumping network to cool the rods and there are back-up systems. What you are not counting on is a force 9 earthquake followed by a tsunami - however, who in their right mind would advise building nuclear power stations beside a fault line? Those who claim these plants are safe have the perfect answer: they are not. This is the death of the nuclear Spring.

When the pumps driving the cooling system fail, the water used to cool down the plant quickly evaporates as it boils, leaving the rods filled with nuclear fuel exposed to the air. As their zirconium alloy casings melt, the zirconium reacts to the steam, highly volatile hydrogen gas is released and this can explode when it combines with the air. This is possibly what blew the outer casing today at reactor 2 and at reactors 1 and 3 on Saturday and Sunday. The fire at reactor 4 appears to be in a storage unit for rods which started to burn, presumably because the cooling system has failed there as well.

The technicians at Fukushima I continue to flood the chambers with seawater to try to cool them down; while it is true that radiation levels at the plant site are decreasing, indicating that the earlier reading was a spike, today's fire at reactor number 4 is a sign that things were getting out of control and the rupture of the inner casing at reactor number two, while explaining the release of the radiation into the atmosphere, does not explain what exactly is unfolding underground. Now there are rumours of an increase in temperature in reactors 5 and 6...