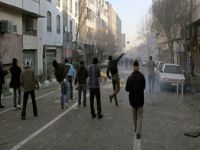 Hillary Clinton had instantly recognized them by referring to them as the Iranian "opposition" a few months ago: "We continue talking with them and supporting the opposition." The same government that, in the words of Juan Gelman, had so many ups and downs against the protests against the government of their ally Hosni Mubarak in Egypt, now they have thrown themselves into the effort to head up support to those who are allegedly fighting the government in Tehran, granting them a semblance of legitimacy.

Towards this end, the U.S. State Department has opened a Twitter account USAdarFarsi to encourage those who do what America wants. Quickly, in an instant, the mainstream Western media, for example, the Spanish press started talking about repression in the Iranian capital, showing images of a burning trash can they call a "barricade" (El País--The Country), and a video in which a small group People burn a blanket on a busy road to the indifference of passing drivers (Público--Public) which was used to talk about victims of firearms.

Once again the technique of self-fulfilling prophecy begins to operate from the media against U.S. enemies, announcing in advance what the White House wants to happen. In this case, the goal is to divert the anti-imperialist and popular rebellion in the Middle East against the main enemy of the United States and Israel in the area and prevent the fire from reaching regimes such as Morocco and Saudi Arabia, faithful servants of the Empire.

And not only is the United States acting in this case, the consul of the Spanish government in Tehran who was weeks ago so reluctant to investigate and condemn the Moroccan regime's crimes against the Saharawi people, spent four hours at a police station in Iran "after being stopped when I strolled through the center of Tehran while the 'protests' were taking place "...

Much ado about nothing, the U.S. is desperate to deflect attention. See the picture showing the "thousands" of demonstrators, and this is just Tehran. The rest of the country is, well, er. quietly living in peace. University of Tehran Professor Seyed Mohammad Marandi said no more than "a few hundred rioters" were in downtown Tehran.

However, just survey the western corporate media. Being dusted off are the stories that failed so miserably not long ago, trying to push Washington's agenda.

The Empire is now determined to even the score in the Middle East, by generating displays of mass discontent to bring down a U.S. adversary in the Islamic Republic of Iran.

In other words, they will try to "get something going" in Iran. The administration will fail, and the spectacle will be disheartening for them.

Did somebody say "demonstrators" for hire?

Here's looking forward to seeing them fall on their faces once again. It's over...