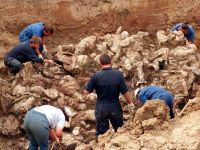 In just the last 3 years, more than 38,255 people have been missing due to State Terrorism in Colombia ... 250,000 people are estimated to be missing (kidnapped and tortured) in the last 20 years, under the logic of "dissuading the claim by means of terror" (the Terror State seeks to prolong the terror by making the body disappear, thus prolonging the anguish for the survivors).

* With the physical elimination of an entire political party, the Patriotic Union (UP), more than 5,000 people from UP were killed by the state.

The situation of social injustice is overwhelming in Colombia, and every day the gap between rich and poor widens. State repression is naturally intended to silence the discontent with this dramatic situation:

At least 68% of the population of Colombia lives in poverty and destitution. The concentration of wealth is scandalous and outrageous: Colombia is the 11th most unequal country in the world (#11 GINI coefficient of inequality), and is the most unequal country in the American continent. According to the most lenient numbers, there are 8 million homeless and 20 million poor. Annually more than 20,000 children under 5 years die of acute malnutrition (UNICEF figures), out of 100 displaced pregnant mothers, 80 suffer from chronic malnutrition. Simultaneously and correlatively to this misery, only one banker, Sarmiento Angulo, controls 42% of the national credit and he has reported profits of 1.250 million dollars in only the last two months of 2009.

* State Terrorism is displacement of people in favor of big business: more than 4.9 million people have been displaced from their land by massacres at the hands of military and paramilitary forces within the State strategy of "scorched earth" to clear the fields of population and thus offer the land to multinationals at high economic interest.

* 10 million hectares of land have been stolen this way and the victims displaced, their land offered to multinationals, for large estates, and new paramilitary bosses, the scandal of "agriculture deposited insurance income" consolidates this theft to the victims.

* State Terrorism is: The largest mass grave in Latin America, to be found behind the military battalion of the army in the Macarena, a gruesome discovery, which has not yet raised the international condemnation it deserves that the Colombian regime deserves: more than 2,000 bodies of missing persons by the Omega force of "Plan Colombia."

* State Terrorism is: Using a tool for injecting paramilitary terror in the population, in order to silence them, keep them docile and displacing them, a tool of horror that practices massive violations, dismemberment with a chainsaw, impalement and chilling other horrors. A report of the Office of Justice and Peace in February 2010 indicated that 30,470 paramilitaries claim to have committed murders in approximately 15 years ... In the most recent report, of January 2011, the Attorney General revealed that it has documented 173,183 homicides, 597 massacres and 34,467 disappearances committed by paramilitaries, crimes committed between 2005 and December 2010 ... and the drama is even a more Dantesque gruesome sight ...

Several paramilitary groups have testified about the strategic nature of the paramilitary structure for the Colombian state, and given dozens of names of generals, businessmen, corporations, politicians and promoters of paramilitary ... and there is still no fully deserved and urgent international condemnation of the Colombian State, which, unpunished, continues with such genocidal practices.

* Thousands of mass graves containing thousands of bodies massacred by Colombian paramilitaries of the Colombian State: The paramilitaries have given some coordinates of the pits in order to be able to receive the "Law of Justice and Peace," a law drawn up under the direction of one of the biggest promoters of paramilitarism: Uribe. A law that grants them impunity if they show "repentance."

By April 2007, when the first year was marked searching for mass graves, the Office had received 3,710 reports of places to find them, but most had not been explored, according to the State, for "lack of resources" ... The families of the thousands of victims expect DNA tests to be carried out on the corpses and remains found, but the government justifies its inaction saying "overflow" and "lack of resources" ... resources they managed to have to pay the military and paramilitary.

The impunity laws for paramilitaries and their financiers are deepened under the Santos government: "(...) The information that arises in the framework of the agreements will not, in any case be used as evidence in legal proceedings against the subject who signs the Agreement of Contribution to the Historical Truth and to Restoration or against a third person." Act 1424, approved in record time, 15 December 2010.

* State Terrorism is crematoria and breeding grounds for caymans and paramilitary tools of the State and multinationals ... where the paramilitaries have eliminated thousands of people ...

* Thousands of murders, including the scandal of the "false positives": the military kidnap young boys, masquerade them as guerrillas and murder them, and falsely pass off the corpses as guerrillas killed in combat." The mass media are responsible for spreading the staging, since in Colombia, the mass media are indeed what they say: military sources. This will allow the military to "show results" in its anti-insurgent war, and allow them to murder civilians who are troubling to them.

Media coverage of the dead who are suspected guerrillas in Colombia is quite grim: they show bodies lined up, half-naked ... in this way it shapes public opinion in the dehumanization of the guerrillas. Policy 029 of the Ministry of Defence encourages false positives, and there are more than 2,472 documented cases of such killings of civilians, which demonstrates that this is a state policy.

* More than 7,500 political prisoners, many of them victims of judicial assemblies, a common practice against social activists.

* Hundreds of car bombings, another type of "false positive" on the part of the police and military forces have put bombs in plenary meetings in Bogotá full well to create a base for mounting a media campaign to discredit the guerrillas. These self-attacks were recommended and praised by the DAS, the Department of Administrative Security, as stated in documents.

* The human rights violations are deepened as it is viewed as an occupied country: in Colombia there is a large U.S. military presence, Israeli mercenaries and 7 U.S. military bases have been implanted, plus the Colombian State has granted the U.S. Marines total immunity for all crimes committed in Colombia. There are already several cases of girls being raped by Marines, who enjoy total impunity, as the Marines have "carte blanche" to rape, torture and murder in Colombia.

The violence of the onslaught of big capital, in their eagerness not to lose Colombia as a valuable "warehouse of resources," has established and maintained that monster that is today the Colombian State.

Years ago that criminal state would not exist without the extraordinary, enormous "help" of the U.S.A. and EU, without going into debt to the Colombian people to cover military costs, and without their paramilitary Strategy of State Terrorism. Without military and media support, the Colombian government could not perpetrate such barbarity, and the Colombian people could have achieved true independence and emancipation from so much greed, death and pain.