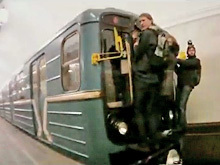 Two students died in the Moscow metro on Monday night as they were riding on top of a train carriage. The incident took place at about midnight on Filyovskaya line of the subway. Two young men, both born in 1991, climbed on top of one of the trains and died as a result of their extreme night ride.

"The body of one of the men was found on the roof of the carriage on Kievskaya station. The man suffered multiple bone fractures. The body of the other man was recovered near the tracks in the tunnel between Kuntsevskaya and Pionerskaya stations of the same line," officials said.

On Monday night, they climbed on top of one of the trains to ride several stations on Filyovskaya line. This is presumably a surface line, but it also has underground passages.

As a result, Vartanyan had the base of his skull fractured, whereas Mikirtumov was swept off the carriage. The man fell down on tracks and had his neck bones fractured.

A source at Moscow's law-enforcement agencies told RIA Novosti that the students had not died as a result of an attempt to commit suicide. The men were sporting ski masks and gloves, which means that they had been prepared for the ride, officials said.

This summer, many young Muscovites found a trendy kind of extreme entertainment - train surfing. Young men and women take a train ride while holding onto the back of the last carriage of commuter and metro trains. Some others lie down on the groove between the tracks right before the arrival of a train. Train surfers upload their videos on YouTube and say that their prime goal is to become famous. A related social media community counts over 2,000 members, RIA Novosti reports.

Train surfing in the subway leads to lethal outcomes in almost 100 percent of cases.

"The tunnels in the Moscow metro are very narrow, especially near the stations. They were not designed to have something or someone else outside the trains. All the tunnels are wide enough to house only the trains, and any ride outside the trains may result in severe injuries and severed body parts," an official said.