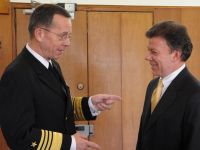 The political reform law is for the sanction of Juan Manuel Santos who changed the electoral roll. He established that the new census is made up of those who voted in the "last election" - the one of June 20, 2010 - plus those who register then get new cards. The decision is to extract from the census the members of the Alternative Democratic Pole party, who rightly were called to abstain from voting for Santos and Mockus. If those who voted yes last May 30 wish to vote in the upcoming elections, they will have to re-enroll, an imposition that violates their constitutional rights and will leave out hundreds of thousands who do not even know, and there is no way to let them know about it - that they were taken off the census.

Vargas Lleras and the Saint-Uribismo or Uribe the Most Holy, the terms are interchangeable, also reduced the census for the referendums even further. He fixed it so that only those who voted in the referendum of 2003, elections in which neither the polistas nor millions of Colombians took part. Henceforth, it will be very easy for the government to win a referendum, since the threshold will drop to about 7.5 million votes to half or less. A question nobody from the Government will answer: What does Juan Manuel Santos think he will approve by using referendum?

The Polo Democrático Alternativo asked President Santos to object as inappropriate and unconstitutional the reduction of electoral roll. But they want to be like madmen.

In recent weeks, Brazil, Argentina, Bolivia, Chile, Ecuador, Guyana, Paraguay, Peru and Uruguay recognised the Palestinian state, a country that is a colony of Israel because it is how the United States wants it. The norm was that they recognised the borders defined by the UN in 1967. Before it had been recognised by Costa Rica, Cuba, Nicaragua and Venezuela, and soon will be by Mexico and El Salvador. There are now 110 countries that recognise the Palestinian state and condemn the horrors committed by Israel in Gaza.

As expected, the government of Juan Manuel Santos announced that it will not recognize the Palestinian state, a position he also has, what a coincidence, in common with the United States. But on the other hand, Colombia will send troops to Afghanistan under the command of the U.S. and other powers to colonise these countries. Evidence of the fact that Santos did not yell at the neighboring Presidents does not mean he does not turn in the orbit of Washington.