Algeria picks up the fire of Mideastern protests 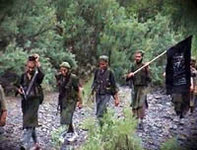 Secular regime in Algeria faltered before the Islamists. The country's President Abdelaziz Bouteflika, disturbed by the rise in anti-government protests, promised to lift the state of emergency imposed in 1992 in the near future, and permit previously banned rallies and protests across the country. The rule, however, does not extend to the capital.

According to him, the state of emergency was a necessary measure aimed at curbing terrorism. A civil war in the country that is still ongoing so far has claimed the lives of over 200,000 Algerians. Most of them are civilians killed in bombings and Islamist insurgency operations of the government forces.

Yet, Bouteflika has promised that from now on anti-terrorist operations will be put under a strict control of the law. This is not an accidental comment. Many Algerian bloggers are convinced that the strange mass killings of rural residents are not at all the work of Islamists. They blame the muhabharat, Algerian security services, since FIS, GIA, Salafis, and other radicals had no reason to kill the villagers who were their mainstay.

"Limited democratization" proposed by Bouteflika also implies that the opposition will have access to the media. The Islamists find it extremely funny, since such privileges are granted exclusively to the authorized parties. Salafis called their representatives Bouteflika's "lackeys" and "sycophants" whose purpose is to pretend to be the democratic opposition to their master.

Yet, Bouteflika would not be himself if he had not reminded this "opposition" that under no circumstances freedom should result in slipping into anarchy, for which Algeria has already paid a high price.

In January, followed by the events in neighboring Tunisia, there were serious clashes of protesters with the police in the capital of Algeria which resulted in two deaths and dozens of injures. In fact, the opposition gave Bouteflika an ultimatum: democratic reform, abolition of the state of emergency, release from jail of those who protested against high prices and unemployment, and liberalization of the media, including work permits for private television channels.

Earlier Yemeni and Jordanian authorities made obvious concessions to the opposition. As for Algeria, 20 percent of the 35 million of the population live below the poverty line. The unemployment exceeds 13 percent. The country is also desperately short of housing. Officials complain that one reason is the high birth rate. According to the Algerian proverb, a female is only considered a woman if she gave birth to two children.

Although Bouteflika has also promised to help to solve these problems, including through lowering the food prices by 41 percent, few Algerians believed him. They are wondering why he could not have done it earlier.

It is easier to understand why much of the population of Yemen, Egypt and Tunisia who have no major oil fields are trapped in poverty. Yet, how can we explain the impoverishment of the people of Algeria, the country that ranks first as the world's leading producer of gas, oil and phosphates?

Many Algerians believe that Bouteflika confuses the treasury with his own pocket. Therefore, the "concessions" made by Bouteflika are not able to calm the rage.

By the standards of the Arab countries the period of his rule is not that long - nearly 12 years. Yet, the Algerians have accumulated a long list of complaints. The Algerian people are convinced that he is an American puppet. Back in the day democrat Clinton was extremely unhappy that the country neighboring Europe is ruled by the junta.

Under the pressure from the U.S. and EU, former head of the Algerian military General Lamine Zeroual retired from his position. He was replaced by the Algerian old functionary Bouteflika who began work during the time of the country's first president Ben Bella. As for Bouteflika's candidacy, the choice of the "national leader" was rather strange. The West was not bothered by the fact that back in 1981 Bouteflika was convicted of a large-scale financial fraud.

Bouteflika won the presidential election three times (in 1999, 2004, and 2009). His rating was so high that one might think that he had become a real "father of the nation." The number of votes cast for him at times exceeded 90 percent. This is not surprising: for example, in 1999, he was the only candidate in the election, as all other candidates refused to participate in the elections in a protest against the violation of electoral rights of the citizens. The radical opposition boycotted the election every time, calling it "a farce with a known result".

During the years of his reign, "democrat" Bouteflika got so involved in the game that he changed the constitution in the ways that "martinet" Zeroual have never even dreamt of. In late 2008, he amended the basic law of the country that allowed the President to rule Algeria for life.
Meanwhile, every year during his tenure the problems in the country have been multiplying. For example, the national issue has sharply escalated, which resulted in the bloody suppression of mass demonstrations in Kabylia in 2001-2002. Kabylia rebelled against Bouteflika's regime because he took away their right to study in their native language.

Of course, the Islamists are already trying to take advantage of the situation. After the split of the Front of Islamic Salvation (FIS), the defeat of the Armed Islamic Group (GIA), the most radical Islamists who have refused to lay down their arms got united in the Salafist Group for Preaching Jihad. Bouteflika said that a thousand of militants hiding in caves and burrows did not pose a threat to his regime and would soon be destroyed.

However, since 2006 when Al-Qaeda took the group under its wing, the Algerian Islamists have proven that they were written off too early.

Now they are waging a successful information war against the government using the Internet. They appeal to the religious feelings of the believers and argue that Bouteflika, who sold out to the West, is trying to destroy the true Islam. The radicals have promised that as soon as he is overthrown, they will redistribute the income from oil and gas in favor of the people. This campaign is becoming increasingly more popular among the people.