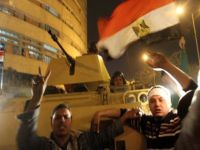 When Tunisian, Mohammed Bouazizi, in desperation after police seized the fruits and vegetables that he sold on the street to survive set himself on fire, neither he nor anyone else could provide the leverage that would have been needed to prevent the young martyr's death. The flames that burned, burned millions of hearts and minds in Tunisia, Egypt, Jordan, Yemen and several other Arab countries of North Africa and the Middle East.

Egyptian people take to the streets and face tanks in Cairo

Almost two months ago, there were large popular mobilizations and political turn arounds that can alter the regional framework. One can characterize some of these revolts as popular uprisings with revolutionary potential, but the fact is that they are still far from mature as social revolutions. Nevertheless, they have a huge political importance to the region and to the international situation.

The current political turn arounds directly affect the interests and the imperialist domination and power in the region, questioning the submissive relationship those countries have with the United States and Israel (which can come out of this process severely beaten), and accentuate the trend of the relative decline of U.S. global hegemony.

It is important to recover in which economic, social and political context these popular uprisings happen in Arab countries. Underpinning all of these popular uprisings, largely spontaneous, there unacceptable objective conditions of life that were accumulating dissatisfaction and situations increasingly oppressive and desperate.

The regional context, given the deep structural and systemic crisis of capitalism is the aggravation of social inequalities and poverty, the offensive against the rights of workers, increasing unemployment, rising food prices and scarcity and proliferation of high costs and of the informal economy, affecting mainly of the young. In the case of Egypt, the youth comprises two thirds of the population, and this fact explains much of the role of youth in demonstrations, and use by those of modern forms of communication via the Internet.

The political context of those countries where the flames of revolt will scorch and burn political regimes one by one, are secular regimes on the one hand and the secular, historic achievement of these peoples to be preserved, but otherwise these schemes are true reactionary pro-imperialist dictatorships, with a more or less "democratic" look, with strong police apparatus, military and intelligence that could stop the sparks of outrage with repressive actions.

The U.S. position is changing according to the unfolding of events. From a starting position of outspoken defense of the allies, together with the frightened Israeli government, the U.S. began to defend "transitions" that do not compromise 'democracy' (read U.S. interests).

The U.S., as we know, are masters in the art of portraying reactionary dictatorships they support as "democratic," and of altering with propaganda the practice of state terrorism as a "freedom struggle." Hillary Clinton, commenting on the situation in Egypt, said cynically that she hopes the eventual takeover by the opposition in Egypt did not "shake democracy and lead the people to oppression."

Senator John Kerry, in an article published in The New York Times, warns Obama so that the U.S. does not commit with Egypt and other Arab countries the same mistake they committed in Iran in 1979 (until then, Iran was a strategic ally of the U.S.). They kept up until the end with the collapsed regime and since then are rejected by the Iranian people. Kerry proposes to operate with "transitions" and resettings that even imply concessions, this meets with the popular anger without change of the political regime. It is there that defines the built-in tactics of the apprehensive pronouncements of Obama and Hillary Cilnton.

Obama's speech in Cairo for a year and a half, preaching "democracy" and "human rights" like mantras to strengthen and expand the American rule in the Middle East and the Arab and Muslim countries, proved to backfire. The U.S. hoped to destabilise and overthrow regimes like Syria and Iran to reconfigure the region politically, and now shortly after are facing serious problems in their protected "democracy."

Obama's speech in Cairo, urged a "new Middle East," docile and subservient, and is receiving signals from a new Middle East, but quite different from what he wanted. Even having a lot of political and military force, fortunately the U.S. does not control everything and the Arab peoples are in the streets carrying flags of hope and fighting for real change of political regime.

Political changes in Lebanon and Tunisia

The changes began in Lebanon, with the fall of Prime Minister Hariri and the assumption of a new cabinet formed by a parliamentary majority of which involved the progressive and anti-imperialist forces, especially Hezbollah. A few days before his fall, Hariri had been with Obama in the U.S.

After the martyrdom of the young Tunisian, various governments and regimes have been singed by the fire of riots. In Tunisia, students and youths, moved by the sacrifice of their countryman, took to the streets, and were joined in the protest by thousands of workers, peasants, intellectuals and urban petty bourgeoisie. They demanded the ouster of President Ben Ali, who headed the regime which was surrendered to the diktat of the European Union and the USA.

Ben Ali turned over what remained of his authority to the prime minister and escaped through the airport, leaving his post and the country. The mobilisations were partially successful; they formed a transition government, the repression was overcome and conquered, there was amnesty and legalisation of all political parties, including leftists and communists, and elections were called for in the next months.

Millions of Egyptians in the streets

Egypt becomes the epicenter of this wave of popular indignation. With over 80 million inhabitants, is the most populous country, one of the most important countries in terms of its geopolitical region, and the main regional U.S. ally after Israel, therefore they receive massive financial and military aid.

Millions of Egyptians are on the streets of major cities demanding the democratisation of the country, the election of a free and sovereign Constituent; civil and political liberties, an end to repression and corruption, measures to strengthen the national economy and create jobs, especially for the young, cheaper food and reduction of the cost of living.

Given the repression of the Egyptian dictatorship, which uses weapons made in USA, U.S. flags were burned, symbolising that the protesters want national sovereignty and an end to Egypt's submission to U.S. imperialist interests and their complicity with Zionist terrorism in Israel. The Egyptian people synthesise their claims with an immediate end to the regime of President Mubarak, and they do not seem to accept the solution of a simple exchange of characters within the same system, which is the tactic proposed by the U.S.A.

In other countries in the region, particularly in countries whose governments are allied with the U.S. and Israel, like Jordan and Yemen, the protests also grow. Jordan's King Abdullah has tried to anticipate by dismissing the prime minister and replacing him with an even more conservative person, and obviously this failed to contain the demonstrators.

Solidarity of our people and PCdoB

It is still not possible to say what the end will be of this story of heroic rebellions that are ongoing. What is clear is that the general sense of the fire of renewal has encouraged Arab nations to confront repressive and pro-US and Israel regimes, even with hundreds of dead and tortured, and thousands of prisoners and the wounded, is democratic, progressive and anti- imperialist, and they deserve the solidarity of the Communist Party of Brazil, the other progressive political and social forces, and the whole Brazilian people.