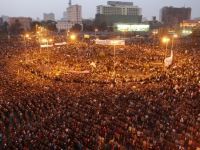 It seems that the days of the dictatorial regime of Hosni Mubarak are numbered. The demonstration called by the opposition for the democratisation of Egypt gathered nearly 2 million people on Tuesday (1) in Tahrir Square and its environs in central Cairo, surpassing the 1 million goal set by organizers, according to Arab TV, Al-Jazeera.

There was also a protest in the second largest city, Alexandria, and Suez. The opposition forces marched together and denied the dialogue proposed by the government (always under the guidance of the USA), after feeling trapped. They found that the use of repression backfires.

A people without fear

The UN estimates that 300 people were killed and more than 3,000 were injured over the past few days that anger against the dictator invaded the streets. They are the martyrs of the rebellion. The government also criticized Al-Jazeera TV, arrested journalists, declared a curfew, banned the internet and practiced other scams.

But none of this was enough to prevent the massive popular support for the "march of 1 million," which for a pleasant surprise to the organisers and the dismay of Mubarak nearly doubled the anticipated size. The people had no fear. They ignored the curfew and continued to occupy the streets of Cairo. The government changed its tactics and the army behaved with civility this time. Faithful to the council of Washington, the protest was not stifled and probably avoided the worst because of this.

U.S. imperialism was a tremendous skirt before the misfortune of their faithful and obedient ally in the Middle East. The same can be said about Israel, whose government has sent messages to Barack Obama begging for support for the dictator of Egypt, who does the dirty work of executioners of the Palestinian people in the region.

The U.S. cultivates the false image of defenders of democracy and human rights worldwide. It would not look good if Obama openly made statements in defense of an allied dictator. Hence the desperate and dubious maneuvers of Washington, with pressures of factions and moderate statements that call for more democracy and less repression, without removing support for the dictator. At the same time, there is a great escape of U.S. citizens living in Egypt, fearful of becoming easy targets of popular wrath, as occurred in the course of the 1979 Iranian revolution, despite the different circumstances.

The last order of the empire to the regime, was announced Tuesday, in the heat of the demonstration of 2 million. It provided that Mubarak should not run for reelection in the upcoming presidential election, which must occur in September. Obedient, the dictator announced that night that he will not be part of the contest for the presidency. Those that remained concentrated in the center of the capital cheered the popular news, but made it clear that they want Mubarak out immediately and that the struggle continues.

The opposition had repeatedly announced that they will accept no other solution outside the immediate resignation of the president, creation of a transitional government and the holding of free elections, faithfully reflecting the desire of the people. "The only thing that we will accept from him (Mubarak) is that he take a plane and go," said lawyer Ahmed Helmi, 45, one of the two million Egyptians interviewed on the Al-Tahrir Square for Al-Jazzera.

The wave of protests against President Hosni Mubarak began on January 25, following the rebellion that toppled the dictator of Tunisia, Ben Ali, another close ally of U.S. and European imperialism.

In both Tunisia and Egypt imperialism has lost its golden rings and now it maneuvers around the clock to just preserve its fingers.  In the backdrop of the ongoing events in the Arab world, it is not hard to see the decadence and crisis caused by U.S. hegemony in the world.

Current events pave the way for profound changes in a region that is rich in oil and natural resources, and points toward a new Middle East that is not in line with the designs of American and European imperialism. The new order that the popular rebellion draws in the streets is a cause for severe headaches in Washington and Tel Aviv.