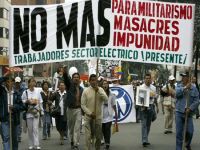 The Aracely Canaveral Velez arrest is a judicial group whose purpose is to persecute the political opposition in Colombia and stigmatize union activity. Trade unionism is severely hit by state persecution: 60% of trade unionists killed in the world are murdered in Colombia, killed by paramilitary tools or directly by the security forces. So in 2010, 47 trade unionists were killed, if you count Joseph Mayusa killed on 31 December 2010, and six who disappeared.

Who is Aracely Canaveral Velez?. A union leader for more than 20 years, exercising leadership in the Garment Workers Union, Leonisa SA (SINTRALEONISA), the Union of Textile Industries in Colombia (SINTRATEXTIL) and the informal union ASOTRACOMERCIANT subsidiary of the United Workers Central (CUT). Militant Alternative Democratic Pole. She has also been characterized as a community leader committed to the education and training of grassroots and union social sectors. At the family level, we should note that Aracely is a mother, head of the household to a minor and is caring for her elderly mother, who resides in the city of Medellin.

Imprisoned poet and journalist Angye Gaona: the Colombian government wants to silence her to keep the darkness of genocide hidden. Poet and journalist, imprisoned for thinking, in Colombia, a country in which the state has made thought a crime. Angye is a creative and socially committed woman, always active in the development of culture, part of the organizing committee called the International Poetry Festival of Medellin, the quality of work and dreams testifies to a tie between peoples. Urging an international movement for liberation and for reporting that the Colombian state prisons hold more than 7,500 people for the "crime of opinion" in other words, thought crimes: there is a real dictatorship in disguise.

It is an intolerable situation: every day they stop people, an opposition politician, student, union, a sociologist, a farmer being killed or disappearing ... The repression by the Colombian government against the Colombian people to silence their social claims is brutal. It is urgent that the world move in solidarity! That is to know this reality and the dimensions that transcend all in the world.

Another Colômbia is possible ...!!