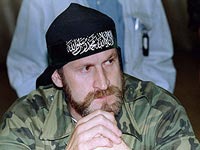 Poland has denied visa to London-based emissary of Chechen terrorists, Akhmed Zakayev. Zakayev was going to visit Warsaw to attend a court meeting devoted to the case about his possible extradition to Russia.

"I don't understand this decision," Zakayev's lawyer Radoslav Bashuk said. "I would like an explanation as to why a visa denied the person who requests it because he wants to participate in own hearing."

Akhmed Zakayev, the emissary of Chechen terrorists, formerly one of the most well-known warlords, was put on the international wanted list in 2001. Russia accuses him of terrorism and a series of grave crimes, which he committed to infringe upon Russia's integrity and change the national constitutional structure. Zakayev took an active part in the organization of illegal armed groups.

However, Europe did not hurry to deliver the terrorist to Russia. In 2002, during the hostage drama at Moscow's music theater, Zakayev arrived in Copenhagen, to participate in the so-called World Chechen Congress. The police of Denmark arrested Zakayev at first, but then released him. As a result, the emissary found political shelter in the British capital. In September of 2010 he traveled to Poland to attend another meeting of the World Chechen Congress.

Russian officials stated that the congress in Poland was nothing but a provocation and urged the Polish authorities to deliver Zakayev to Russia. The emissary spoke of Poland as a "friendly state." The so-called Ichkeria Republic (Chechnya) has its representative office in Warsaw, there is even Jokhar Dudayev Square in the city named after the Chechen terrorist. Many Polish officials publicly sympathize with terrorists too.

Russian-Polish relations improved after the tragedy with Lech Kaczynski's plane. Polish President Bronislaw Komorowski and Prime Minister Donald Tusk stated that their country was prepared to build new relations with Russia. However, Tusk does not sound as Russia's partner when it goes about Zakayev.

"It is our aim to prevent Poland being exploited by either Russia, which demands Zakayev's extradition, or Zakayev, who uses our country to unrestrainedly demonstrate his views," Tusk said.

Zakayev was arrested in Poland on September 17, 2010. Afterwards, the terrorist emissary was released - he returned to England quietly. Zakayev's lawyers say that their client's extradition to Russia is unacceptable. They are determined to prove that at court.

The Polish authorities repeatedly denied Zakayev a visa, but they take no action to ban the World Chechen Congress, they do not close Ichkeria's office in the country and they let the emissary of Chechen terrorists leave the country freely. The Polish authorities do not want to ruin their ties with Russia, nor do they want to irritate Britain, where Zakayev finds his political shelter.

Bogdan Bezpalko, an expert for Poland at History Department of the Moscow State University, told Pravda.Ru that no one was going to close Ichkeria's representative office in the center of Warsaw.

"The USA has recently held a public presentation of a book by another emissary of Chechen terrorists - Ilyas Akhmadov. The USA supports Akhmadov, the UK supports Zakayev. Poland will not stand up against these countries. Russia may not hope that Poland will change its loyal attitude to terrorist emissaries," the expert said.