Ivory Coast is spinning out of control and is sliding down a slippery path back to civil war and ethnic conflict. Armed forces loyal to ex-President Laurent Gbagbo yesterday opened fire on UN forces. Meanwhile ethnic conflict has broken out in the west of the country. The UNO warns of a major humanitarian crisis involving 2 million people. 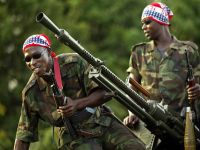 Yesterday UN peacekeepers stationed at the Pullman Hotel in Abidjan were encircled by supporters of ex-President Gbagbo, who opened fire on them. This "act of aggression" is the latest in a string of threatening moves by Gbagbo's armed gangs.

Young J. Choi, the UN Special representative in Ivory Coast, described the situation as "very, very hostile" and becoming worse, since the run-off presidential election in November in which incumbent President Laurent Gbagbo lost to Alassane Ouattara, protected by 9,000 peacekeeping troops at the Golf Hotel in Abidjan, holed up in a six-week blockade.

Gbagbo's loyalists have passed from rhetoric to violence. Young J. Choi explained in a video link from Abidjan yesterday that "They are shooting at our convoys. Fortunately nobody got killed yet but it is very close". He added that hundreds of thousands of youths are being paid and armed to attack the UN forces, which cannot fire back under rules of engagement.

The special envoy spoke about a "deteriorating situation" around the Hotel, where a lot of people are concentrated in a small space, surrounded by the regular police and army, loyal to Gbagbo, and also elements of the elite Presidential Guard, Republican Guard and Special Operations group.

The UN Security Council is expected today to vote for an increment of 2,000 troops to add to the 9,000 UNOCI peacekeepers, also the deployment of three combat helicopters. This should provide a rapid reaction capacity not only in Abidjan but also other areas where ethnic strife has broken out.

Tens of thousands of people are now displaced due to ethnic conflict in the west of Ivory Coast, which is becoming more and more complicated with different groups involved.18,000 Internally Displaced Persons have been registered by the UNHCR in the towns of Man and Danané.

A further 13,000 people have arrived at the Catholic mission at Duékoué. The compound does not have the conditions to house so many people and the risk of disease grows greater by the day. In the east of neighbouring Liberia, 30,000 citizens of Ivory Coast have fled across the border.

The UN Office for the Coordination of Humanitarian Affairs (OCHA) states that two million Ivorians could be affected in a major humanitarian crisis.