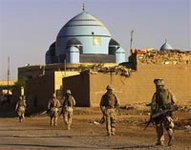 January 17th marks 20 years since the beginning of Operation Desert Storm. The operation entered world history as one of the quickest wars.

The operation of international forces against Iraq became a consequence of the treacherous attack of the Iraqi army at night of August 2, 1999 against the neighboring oil-rich Kuwait. During the next 24 hours, Iraqi troops seized Kuwait and declared it its 19th province. Afterwards, the UN, the international community, including the USSR, were trying to find a political solution to the crisis in the Persian Gulf for six months. Saddam Hussein simply ignored all suggestions.

On November 29, 1990 the Security Council passes the 20th ultimatum resolution, according to which Iraq was supposed to withdraw its troops from Kuwait before January 15, 1991. The resolution did not work.

After the international community failed to regulate the crisis, on January 17, 1991, the multinational troops of the anti-Iraqi coalition launched a military action code-named Desert Storm

Iraq proved to be unprepared to resist to state-of-the-art defense technologies. Practically all vitally important objects of the military and civil infrastructure were put out of order within 38 days: command posts, communication centers, television centers, electric power stations, etc. The last phase of the military action began with the offensive of the ground troops of the coalition on February 23, which lasted for only four days.

On February 27th, then-President George H. Bush publicly stated that all the troops of the United States and its allies were suspending the offensive. Iraq accepted the resolution of the UN Security Council unconditionally, which laid the foundation to the "new world order" that subsequently resulted in the participation of the United States and its allies in two exhaustive wars in Iraq and Afghanistan.

Desert Storm demonstrated brilliant opportunities of non-contact warfare. The coalition attacked Iraq from the air during the first phase of the war with the use of up to 1,000 aircraft. Afterwards, the non-contact warfare was conducted in Yugoslavia under the UN mandate.

Political goals of Desert Storm were to liberate Kuwait, bring the legitimate government back to power, retrieve stability in the region of the Persian Gulf, establish new world order principles and change the structure of the Iraqi administration and its political course.

Military goals of the operation were to destroy the military potential of Iraq, which posed a threat to Israel and several countries of the Middle East and to deprive Iraq of the opportunity to build nuclear, chemical and biological weapons.

For Kuwait, apart from human losses, the war ended with a tremendous ecological catastrophe. Iraqi troops, when leaving the occupied territories, discarded nearly eight million barrels of oil in the Persian Gulf. The smoke from oil fires stretched for more than 1,500 kilometers.

Ultimately, many political and military goals of the operation were not achieved fully. Saddam Hussein's regime existed for 12 more years. Unlike Desert Storm, Operation Iraqi Freedom resulted in the deaths of thousands of people, mostly among civilians, and led to the upsurge of terrorism, which swept across Iraq during the recent years.

If Operation Desert Storm was justifiable because it was meant to curb aggressive sentiments of the Iraqi leadership, the subsequent actions taken by the US administration virtually created a serious geopolitical threat for the countries of South Asia and the Middle East.

Today, al-Qaeda terrorist network runs its activities from Lebanon to Pakistan, where the political instability can lead to most lamentable consequences. The USA and its allies got stuck in Iraq and Afghanistan. The forecasts for the future developmental of the situation there are very pessimistic.

Still, the US propaganda machine tries to present Operation Desert Storm as the triumph of democracy in the establishment of the new world order. However, the situation has changed considerably during the recent two decades. The media described Operation Desert Storm as PR success of the Pentagon, although all military actions that followed it can hardly be referred to as such.

Democracy on American bayonets has never taken roots either in Iraq or Afghanistan.