Teresopolis, January 15, 2011 - It is not easy to describe what I have seen and experienced since the morning of Feb. 12. I've seen other tragedies here in town, but never heard of anything of such a size. Moreover, the experts say that this is the largest natural disaster the country .. but they say so many things. 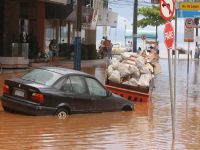 What I know, actually, is that at the end of my shift today, there were 1,200 homeless counted, 1,300 displaced, 238 bodies recovered, and of these, 168 had already been identified and released for burial (without a funeral or departure from the family because there is no time for this, in shallow graves and identified only by a numbered cross), and an unknown number of missing persons. What I know is that  the eyes of the town, swollen and blurred by tears, do not yet believe what they see and that breathing is suspended at each new downpour. I know of children who, in their magical innocence, play wheel in the middle of mattresses that fill the sports field.

I also know that climate change cannot serve as excuses for officials who did nothing to contain the disordered constructions, the invasions, deforestation, did not care for public policy with due attention, that have not invested in prevention and now need to spend more on rebuilding ... I also know that the damage caused to the soul of my people shall never be erased.

Entire neighborhoods were devastated. Rich and poor are suffering the loss of material possessions, friends and family. The scenario is desolation. It is as if a tsunami had happened here, on top of the mountain.

Many neighborhoods are still without electricity and water is already scarce. The forecast is to be totally without water supply for the next 15 days. As if this was not enough, today a group of opportunists and troublemakers - bandits - spread panic in the city. Merchants, banks, supermarkets, malls, pharmacies, clinics and offices closed their
doors for fear of looting and robbery.

Teresópolis looked like a ghost city until the afternoon. After this the state and the union sent reinforcements and the police - who were aiding in searches before and transporting bodies, went back to take care of security. (But the doors of trade continued
closed). The current situation is very serious. But it worries me even more the period to come, when the pain of others no longer bothers us and when the wind turns the mud to dust and blows it away.

* Teresópolis generates about 80% of the market products of agriculture for Greater Rio (metropolitan area); it also supplies the entire region of Lagos, Costa Verde until Ubatuba (SP), Juiz de Fora (MG) and the municipalities in Norte Fluminense region. Most of this production comes from plantations in the second and the third district, both were destroyed by water. Agriculture is one of the three pillars of the local economy.

* Teresópolis will (?) Host the State Tourism Expo in May. What
now do we have to offer? What tourist will want to visit this chaos? Tourism is the
second pillar.

* Without the money from agriculture and without money from tourism, the trend is a
huge downturn in the economy. As a result the retail sales plummet. Trade is the third pillar.

What will become of Teresópolis six months from now? This question does not leave my head.

On the other hand, I also know that this can be a great opportunity for the city to start properly. With planning, serious public policy, which is efficient and effective, transparency and rectitude in action and, above all, with a population more aware and conscious, more participatory and accountable.