U.S. and Israel isolated in the new UN vote 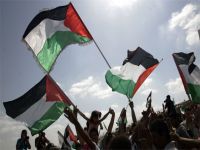 The United States and Israel have returned to stay in almost complete isolation to vote against a resolution on the Palestinian people's right to self-determination adopted by the General Assembly.

The document was adopted by 177 countries in favor and opposed by Washington and Tel Aviv, accompanied by small Pacific states Nauru, Micronesia, Marshall Islands and Palau. Also there were four abstentions: Canada, Cameroon, DR Congo and Tonga.

The text has two points resolving the first of which reaffirms the right of the Palestinian people to self-determination, including the creation of an independent State of Palestine. The other urges all States and specialized agencies of the UN system to continue their support and assistance to the Palestinian people "for the early realization of their right to self determination."

In his introduction to the Assembly, part of the resolution cites a long list of international instruments and documents related to this prerogative, human rights and decolonization.

Equally, the construction by Israel of a wall on occupied Palestinian territory is an action that "seriously undermines the right of Palestinians to self determination." It also points out the need to resume and accelerate negotiations in the Middle East in search of "a just, lasting and widespread peace agreement among the Israeli and Palestinian sides."

The resolution defends and respects the preservation of "unity, territorial integrity and contiguity of all the occupied Palestinian territory, including East Jerusalem" and reaffirms the right of all states in the region to live in peace within secure and recognized international borders.

In late November, Washington and Tel Aviv had been left virtually alone with their vote against the six resolutions adopted by the Assembly on various issues related to the Middle East conflict.

The texts dealt with the Committee negotiating for the exercise of the inalienable rights of the Palestinian people, the Division of the General Office of Palestinian Rights, the Special Programme for information on the question of Palestine, a peaceful solution to the Palestine question and the cases of Jerusalem and the Syrian Golan Heights.

In all these votes, the U.S. and Israeli delegations voted in the opposite way, with only the meager support of the Marshall Islands, Micronesia, Palau and Nauru.

Only Australia has joined with Washington and Tel Aviv in four of the resolutions, Canada in the same amount but in different texts and Japan and New Zealand in one resolution each.