Among the violations are deprivation of family visits, solitary confinement, poor diet and denial of appropriate medical care 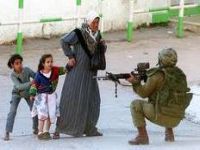 Al-Ashqar described measures taken against inmates that include deprivation of family visits, solitary confinement, poor diet and denial of adequate medical care. He argues that the dehumanizing measures are designed to avoid firmness and determination on the part of the prisoners.

Fatima al-Zaq, a former prisoner, told the Forum about her experience in a prison in Israel, where she was placed in a dirty, solitary jail cell while pregnant. In addition, Israeli doctors prescribed the wrong medicines several times, causing her to have a miscarriage.

Another former prisoner, Fayrooz Arafa, reported her suffering while imprisoned in an Israeli prison. She said that the officials of the Israeli prison authority were inflicting the worst physical and psychological tortures in female detentions with the intention of ending the determination of the women.

Jamil Sarhan, Director of the Department of Human Rights, criticized the punitive methods adopted in Israeli prisons against Palestinian prisoners, including women and children, noting that international laws and conventions prohibit such practices.

Sarhan also condemned the health status of prisoner Linan Abu Ghalamh. Abu Ghalamh. is on a hunger strike for 16 days since officials of the Israeli prison refused to join her with her sister, Taghreed, held at another prison.