Ethnic night in Moscow: Over 1,300 arrested, no one killed 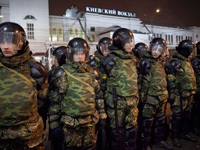 As it was expected, ethnic clashes took place in different areas of Moscow at night yesterday. It became possible to avoid mass riots, no one was killed in the clashes, but several people suffered injuries on both sides. According to official information, the police detained over 1,300 people. Knifes, baseball bats, traumatic weapons and even hammers were withdrawn from the detainees. Both Russians and migrants from the Caucasus consider themselves the winners in the riots. The Russian nationalists said that the victory was theirs, whereas the migrants posted messages on the blogs saying that they had one whole Caucasus and that they were "one big family."

Approximately 150 representatives of national diasporas were arrested on Rostovskaya Embankment. About 200 migrants from the Caucasus gathered near the mosque on Bolshaya Tatarskaya Street and then headed towards Novokuznetskaya metro station. The police arrested nearly all of them. As it turned out later, the people had come to an evening prayer.

The police were expecting the biggest riots near Kievsky Railway Station, near Evropeisky (European) shopping mall. Security measures were taken in Moscow's entire central area. As a result, the city traffic was paralyzed.

Teenagers and young men aged from 13 to 20 came to the Kievsky Railway Station on Wednesday night. As soon as about 1,000 people gathered on the square, Evropeisky mall was closed, its visitors and customers were evacuated. The police started arresting aggressive young men.

Ethnic tensions in Moscow stated rising after the murder of Yegor Sviridov, a fan of Spartak football club on December 6. He was killed in a fight with migrants from the Caucasus. The Russian football fans set out their concerns about the fact that the police released all the suspects, except for the man, who fired his traumatic gun at Sviridov. At first, the Russian fans blocked one of Moscow's busiest roads and then held a march in memory of Yegor Sviridov on December 11. The same day, massive riots shook Moscow's Manezhnaya Square (near Red Square and the Kremlin), where aggressive Russian men attacked individuals of non-Slavic appearance. Thirty-four people were injured in Manezhnaya riots, including five police officers.