Escalating Afghan war into Pakistan would be grave folly 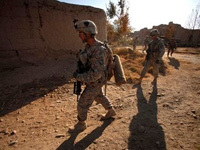 There were signals indicating that failure to win the war in Afghanistan could tempt Pentagon to broaden the theatre of war into Pakistan, citing the presence of Taliban and Al Qaeda in its tribal areas. There is thinking in the Pentagon that this escalation would help put off America's humiliation for another day and save American international power from being undermined.

It is also becoming increasingly clear that American military establishment is in no mood to wind down the war in compliance with President Obama's plans and troop withdrawal will not begin by July 2011. Instead, it intends following the ‘Perpetual War' doctrine, about which President Eisenhower predicted ‘it is wars that feed the American military industrial complex'.

With Republicans gaining control of the House of Representatives in recent elections, the Neocons, Tea Partiers and the Religious Right will likely push for more attacks inside Pakistan on the plea that Taliban cannot be defeated unless their sanctuaries in Pakistan are destroyed, a line that Pentagon takes.

If this escalation occurs, FATA would likely become the next war zone on the pattern of ‘mission creep' of Vietnam. Just as the Americans blundered into Cambodia and Laos to destroy the communist camps and lost the war, they are itching to make a similar mistake again.

The danger of this eventuality looks real, despite President Obama's assurances of a lasting friendly relationship with Pakistan, unless the Obama White House reigns in the military leadership, which shows signs of defiance, and asserts civilian control over the nation's war policies.

This would be an extremely dangerous development. ISAF would be pitched against a large part of half a million strong professional army, in addition to the Taliban and the Pashtun tribes that straddle both sides of Pak-Afghan border. Unable to subdue a far lesser number of rag tag Taliban fighters in Afghanistan, one wonders how would ISAF fare against such a force in Pakistan?

One thing is certain though. This will give a new dimension to the American-led war in the so called AF-PAK region, send South and South West Asia up in flames and cause a huge set back to American regional interests.

For the last nine years, Pakistan's forced involvement in the American war in Afghanistan has brought nothing but death, destruction and suffering for its people. It destroyed peace and stability and promoted a culture of violence and religious extremism. Oblivious to what Pakistan went through, and Pakistan's limitations in terms of capacity, the Americans continue to insist upon it to ‘do more'.

The recent threat by General Petraeus to undertake unilateral military operations inside Pakistan if the Pakistan Army failed to eliminate militant groups in North Waziristan, particularly the Haqqani Network, was followed through by NATO gunship helicopters, which violated Pakistan's airspace in Waziristan's Kurram Agency and attacked a border outpost on September 30, killing three Pakistani soldiers and injuring two.

Islamabad interpreted these incursions as an attempt to test the waters and gauge Pakistan Army's response. The justification advanced for these violations - "hot pursuit" of insurgents, was mere cover up. The Pakistan Army argued that ISAF commanders in Afghanistan knew very well, and so should have their pilots, that there was no agreement with Pakistan over the rules of "hot pursuit" and this meant that pursuit, no matter how hot, ended at the ‘red line' of Pakistan's border.

To firmly nip in the bud any ISAF ambitions of building on this little adventure, the Pakistan Army lodged a strong protest, demanding an inquiry. The joint inquiry found the firing incident and earlier helicopter intrusions to be violations of Pakistan's air space and deaths of Pakistani soldiers an avoidable mistake.

Islamabad made it clear that these acts constituted clear violation and breach of the UN mandate under which ISAF operates and are unacceptable. Washington was conveyed that the said mandate "terminates" at the Afghanistan border and any impression created by ISAF about the existence of an agreement over rules of "hot pursuit" is not factually correct.

Islamabad demanded public apology, assurances that this would not happen again and action against those responsible for the deaths of Pakistani troops. The helicopter attack also caused the public anger to boil over.

As a retaliatory measure, the border crossing at Torkham was shut down indefinitely. It was opened ten days later, only after hectic efforts, apologies and assurances by ISAF.

ISAF imports 80% of its supplies, from food to fuel, through Karachi port which are trucked into Afghanistan through Torkham and Chaman border crossings. At any given time 3000-4000 ISAF containers and tankers are on Pakistani roads.

The route closure caused a supply chain fiasco for ISAF. Over 10,000 containers and tankers were stuck, while stocks ran low in Afghanistan. Pakistan was wellwithin its right to withhold a facility it provides to ISAF, not under any contractual obligation but as a gesture of support. During the 10-day wait, about 150 oil tankers and containers were torched by the Taliban and angry Pakistanis.

When launching their ‘get tough policy' General Petraeus and the Pentagon had underestimated the response of Pakistan Army and were taken by surprise. According to Washington Post they never expected the border to remain closed for more than three days.

This caused relations between Pentagon and the Pakistan Army to be strained. Reportedly, the crisis in US-Pakistan relations and the supply chain trauma that ISAF faced on account of route closure led to James Jones's early retirement. Gareth Porter, writing for Inter Press Service, reports that "President Obama has clearly abandoned the tough line toward Pakistan represented by cross-border helicopter attacks and accelerated drone strikes in an effort to reduce tensions."

NATO's Secretary General Anders Rasmussen was the first to regret the incident, pleading that the killing of three Pakistani soldiers was unintended. Initially dragging their feet but later under White House directive the US Ambassador in Islamabad - Ms Anne Peterson, and ISAF Commander - General David Petraeus, made public apologies. This was followed by a letter from Admiral Mike Mullen to Pakistan's army chief General Kayani expressing deep regrets over the incident.

By closing the border crossing, Pakistan established a powerful leverage over Washington and US/NATO command, one it can use in future to protect Pakistan's sovereignty, stop cross-border raids and curtail drone attacks.

By forcing Washington to back off, Pakistan conveyed several clear messages. Pakistan is no Afghanistan and cannot be taken for granted; its sovereignty and its national boundaries must be respected; its patience also has limits despite its close alliance with the US; and carrying a war into this country of 175 million people would not be a piece of cake.

It also carried the reminder that Pakistan's assistance remained a key element in ISAF's operations in Afghanistan and is dependent upon respect for Pakistan's sensitivities. US/NATO command had earlier explored alternate supply routes via Russia and Central Asian countries, but these were not found viable as these involve massive airlifts and time delays.

In pushing his unilateral escalation of force General Petraeus allowed the element of distrust to creep back into US-Pakistan relations, which President Obama was taking pains to remove after a long spell of strained relations.

This episode also made clear that the term AF-PAK coined by the Americans was a misnomer and should not be misinterpreted to mean that Afghanistan and Pakistan can be lumped together by ISAF for operational purposes. Pakistan is a separate entity, a sovereign country, which jealously guards it geographical boundaries. The mandate that ISAF was given for Afghanistan neither applied to Pakistan nor could it be extended to it.

The resulting scenario might even influence Obama administration's thinking towards the war. US officials have concluded that the war will remain unwinnable unless Pakistan changes its policy towards suspected Taliban sanctuaries in FATA. But if Pakistan refuses to change its policy and persists with a firm stand like the one it took recently, and if this forces Washington to back off like it did now, this might strengthen President Obama's hand in insisting on a drawdown of troops to begin in July 2011.