Ahmed Bukhari: "If war is total" 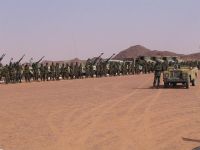 Ahmed Bukhari is the Polisario Front's representative to the UN and has participated in all rounds of negotiations with the Moroccan authorities promoted by the UN. After the assault and destruction of the El Aaiun camp by Moroccan police and military forces, hundreds of young Saharawi in Tindouf (Algeria, where some 165,000 refugees escaped), demanded a return to arms. Ahmed Bukhari alerts to the unpredictable effects of this crisis.

Ahmed Bukhari is part of the negotiating team of the Polisario Front to the UN. In this interview he reflects on recent events in El Aiún and warns of the consequences of breaking the ceasefire.

The delegate from Polisario warned in Madrid last Friday of the likely return to arms, after the vague response from the international community before the bloody events of El Aiún.

Would there actually be a return to armed conflict with Morocco after a twenty year interval? How far does this warning go really?

A concrete analysis of the situation and facts was made public and showed that there is an outcry for the Saharawi to change things. And that may well lead to the conclusion that the diplomatic road is being exhausted.

The ceasefire with Morocco was declared in 1991. Did it serve for anything, from the standpoint of the Polisario?

On one side, those twenty years have strengthened Saharawi identity and unity. But it is also noted that the international community did not fulfill its obligations in resolving the conflict over the last colony in Africa registered by the UN.

Is there new data on what happened with the violent eviction of the Saharawi camp near El Aaiun? What information do you have?

The information will come with great difficulty. But we have reason to think that things have reached the dimension of a massacre. So we ask the Security Council for an investigation into the events. But France and Morocco, since they fear this investigation, did not allow it to become possible [Paris exercised its right of veto].

What evidence do you have?

Morocco had the audacity to say how many casualties they had, but did not speak of their victims. And if an attacking force, which takes an element of surprise and superiority, has a total of eleven deaths and dozens of injuries, it is reasonable to think that those the forces attacked and surprised have a casualty list five times that amount. These are the calculations.

On the other hand, there are facts and evidence that eyewitnesses saw 36 corpses in the morgue of the hospital in Laayoune. And there are eyewitness accounts of a mass grave where they buried 16 men and 19 women. All these signs call for an investigation. The Moroccan Government laid the ground for the entire effort of twenty years to convince the Saharawi that their occupation [Sahara] was paradise for them.

It gives the impression that the only way to keep the conflict on the international agenda that does not end in oblivion, is the Saharawi intifada. But the view is that this will be bloody ...

The Saharawis have been forced to the worst situation in 1975 when Spain abandoned us. We were victims, in February 1976, of napalm and white phosphorus [chemical weapons used by the U.S. in Vietnam]. Hundreds of Saharawi died later, six hundred disappeared, according to Moroccan media. Moroccan military authorities were throwing wounded Saharawi fighters from helicopters. That is, we have been living the horror since 1975. And what happened in the camp of El Aiún is the continuation of the horror that the occupying power is practising against a people.

There is a new generation of Saharawi in El Aiún who say they are refusing to hold another twenty years of negotiations. Everything points to their radicalization.

The Polisario wanted to give the entire priority to diplomacy, but the brutality and indifference of the Moroccan Security Council, and the direct interference of France, do not allow this to continue or for anyone to believe in diplomacy. Therefore, any outcome is possible. What is more difficult is that there is no way to contain it, it escapes us. Hence the huge mistake of the Security Council not agreeing on a mission to investigate.

If the situation is radicalized, the youth of El Aiún will place themselves on the edge, but can you do that in front of the Moroccan wall?

If Morocco forces this exit, the likely scenarios of a war are very different from those that took place in the seventies and eighties. The walls ... would be the first to fly, the walls and where there is a military presence in Western Sahara. It would be a total war.

It is assumed that, for this to happen, you have the support of Algeria, otherwise it would be difficult ...

In a total war in this region, it is not known how many friends and how many enemies there are.

I say that we would enter into the strange unknown and it will bring pleasant and unpleasant surprises ...