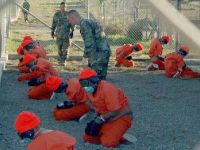 The closure of the Guantanamo prison, located in Cuba, remains a stalemate. Although the U.S. president, Barack Obama, used this issue in his election campaign and even promised its closure in January of this year, the situation remains unchanged. Organizations such as Amnesty International are battling for the promise to materialize, but it is also assumed that the newly elected members of the U.S. House of Representatives will fight against closing the prison.

In a story published yesterday (8), in the Daily Granma, the Republicans' position on the case was clear. Peter King, a representative from New York, who will assume the chairmanship of the Committee on Homeland Security in January, said that his agenda will be to stop the plans of the Obama administration, which seeks to transfer detainees from Guantanamo.

Lamar Smith, the future president of the Judiciary Committee, shares the same view. McCain has reinforced the need to prevent the closure of the prison and added that the detainees should not be tried before civilian courts.

Even saying, after his inauguration, that Guantanamo would be closed in one year, ten months later, in November 2009, Barack Obama stepped back and said the prison could not be closed on time. In an interview with NBC, the U.S. President explained that the measure would take longer than anticipated, but efforts to continue the closing procedure of repatriation of prisoners and some trials for others would be maintained.

Along with the promise of closing the prison, he also signed decrees that banned interrogation methods similar to torture in interrogation of terrorism suspects and requested a review of sentences on those accused with terrorism charges.

Currently, according to Amnesty International (AI), about 200 men are imprisoned, living in almost absolute isolation, violating the international standards of human rights. In a report published in April 2009, Amnesty International documented that most of the prisoners suffered ill-treatment during detention. The routine consists of being confined in seclusion for 22 hours in individual cells, with no outside contact and no opening for the entry of natural lighting.

"There is no access to any type of activity and detainees are subjected to artificial light 24 hours a day and constant observation by guards through the narrow windows in the cell doors. They exercise separately in a high-walled yard where little natural light reaches, and are often only offered exercise at night. They may not see daylight for days on end," reports AI.

Also there is no permission for family visits, but the most serious is that prisoners were not charged with any wrongdoing by the U.S. authorities and are only suspected of being "enemy combatants." If there is no real intention to prosecute these people properly, AI demands that they be set free and their personal security guaranteed, since many cannot return to their countries of origin, where they run the risk of suffering from further violations of their rights.

During the closing process, nothing is being done to alleviate the application of the measures imposed in jail and permission for the entry of independent doctors, members of human rights organizations and United Nations experts.