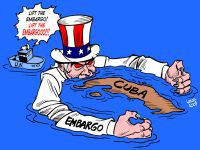 The General Assembly of the United Nations (UN) approved on Tuesday the suspension of the U.S. embargo imposed on Cuba, in force since 1962. The document was approved with 187 votes for, 2 against and 3 abstentions.

This is the 19th consecutive year in which the council put the issue to a vote against the U.S. sponsored blockade of the Caribbean island, where the college of all the nations that constitute the United Nations approved the end of the financial and commercial blockade against the country.

The document calls for an immediate end to the blockade on Cuba. It was approved with 187 votes for, 2 against (United States and Israel) and 3 abstentions (Marshall Islands, Republic of Palau and the Federated States of Micronesia - U.S. satellite, but still not repeating the vote against, abstaining instead).

Official estimates of the Cuban government indicate that the embargo imposed 48 years ago caused losses that totaled about $751.3 billion by December 2009. The blockade involves economic, financial, political and diplomatic constraints, surviving at the expense of the interests of mafias and reactionary and fascist cartels, which they employ beyond the embargo mentioned, also the dirty tactics of destabilization and terrorism to overthrow the Cuban government.

For Cuban authorities and the international community, the government of U.S. and President, Barack Obama, do not demonstrate good will to back off on the embargo, as part of his campaign promises, such as ending the wars. Obama also "forgot" to lift the stifling restrictions of his government against the Cuban people, and he offers Cuba the same hand as that of Bush and his predecessors: a thick fist holding a dagger.