Drunk American sergeant can press the red button any time 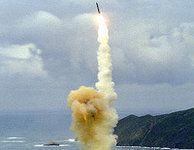 On October 23rd, the United States lost the control over a part of its nuclear arsenal for 45 minutes. The news was made public several days later. The state of emergency occurred to LGM-30 Minuteman III intercontinental ballistic missiles at the US Air Force Base in Wyoming.

Needless to say that the incident with 50 Minutemans has caused quite an uproar in the world taking into consideration the fact that the missiles can turn a large country into radioactive ruins. The 13,000-kilometer range missiles are capable of striking targets in practically any part of the globe. They are the only land-based ICBMs of the United States; they were put into service in 1970. The USA has produced 830 such missiles in total, and currently has 450 in the inventory.

One Minuteman III can carry up to three warheads, 300 kilotons each. Nowadays, as US officials say, the capacity is limited to only one warhead for each missile.

The last Minuteman III was made in 1978. The missiles, despite their respectable age, are not going to be removed from combat duty. The missiles will be reequipped with new W87 (Mk 21) warheads, which, as designers say, outstrip the previous warheads in terms of strike accuracy and storage safety.

The command of the Air Force base, where the incident occurred, does not think that the recent incident should be perceived as something that posed a serious threat to the whole world, as many media outlets portrayed it in their reports. Pentagon officials claimed that the incident was only about a failure in the work of the power supply system, which occurred due to a malfunction of the system of underground communication cables.

"Based on our understanding of the situation right now, as the Air Force has described it, it was not a significant disruption; it was a technical problem," Marine Corps Col. Dave Lapan, a Defense Department spokesman, said Wednesday.

How could they leave the disruption out of attention for almost an hour? How was it possible that one of the world's most technologically advanced countries turned out to be incapable of preventing such an important problem?

It just so happens that the American military have acknowledged their inability to control electric power in the cables that supply electric power to one of the key bases. Does it mean that anything can happen in the future and missiles can be launched automatically next time, when another "insignificant disruption" occurs?

In the meantime, high-ranking sources at Russian military structures said that the situation in Wyoming should not be considered as outrageous. If the incident had posed a real threat, the Pentagon and even the top administration of the United States would have necessarily notified Moscow about it. The Russian administration would do the same, if a similar incident took place on the territory of the Russian Federation.

"The incident, which took place in the USA on October 23rd, means that we can not exclude an unauthorized launch of ICBMs. The Americans failed to control the operation of electric cables, but what about the complicated informational systems? It is an open secret that hackers can easily overcome all possible and impossible barriers today, hacking into computer systems of NASA and the Pentagon. Can we say for sure that there will be no unauthorized launch of missiles in this or that country some day?

"It is obvious that such a perspective poses a very serious threat to the whole world. Nobody wants to be the first to use nuclear arms today, but in case of unauthorized launch a country may provoke an act of retaliation," Anatoly Tsyganok, an expert with the Institute for Political and Military Analysis told Pravda.Ru.

One should bear in mind the so-called human factor. For example, the USA dismissed 2,531 of 97,693 men serving at the objects of strategic nuclear forces in 1986. There was a case when a sergeant, being in a state of mental stress, fired his gun at a nuclear warhead. Thus, the joke about a drunk sergeant who pressed the red button and then asked where Belgium went, does not seem to be funny.

We have to admit that the issue of technical security of strategic arms is a very relevant one for Russia too. Vladimir Yakovlev, the former commander of Russian strategic missile troops, stated back in 1998 that about two-thirds of missile complexes and control systems in the arsenal of the forces were beyond their warranty life spans. Many experts admit that nothing has changed for the better since then. That is why Russia should learn from US mistakes.