Culprits of the Drama of 33 Miners 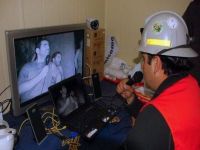 On August 28, in my piece, The mountains are still falling and there are more vultures, I pointed to capitalist greed and callousness as responsible for the accident that trapped 33 miners in Chile. I stated clearly that the culprit was the mining company, "whose bosses show no remorse."

Also pointed out was the obvious responsibility of the Chilean government: "Two months ago, they had noted irregularities in the place, such as the lack of fortification of the ceilings and signs warning of risk areas, besides the absence of joint committees to investigate the causes of accidents and occupational diseases.

"Worse, in 2007, a death had occurred at the mine, forcing the suspension of activities for one year."

After the fuss about the whole episode had passed, with the press transforming it all into a melodrama, at the same time they were diverting the focus of responsibility for the occurrence of nearly 33 murders. Here is how the truth came out.

Only few people still read what comes out about yesterday's attraction. Today others exist, equally manipulated. The truth is that 33 were saved and even Barack Obama was moved ...

But, according to the National Service of Geology and Mines of Chile, the annual average of miners' deaths has for some time been surpassing three dozen. In only the first nine months of this year, deaths amounted to 31 already.

What managed to be avoided, in the eyes of the world, is that the grim statistics are doubling in 2010 ...

And a dispatch from the Spanish agency, EFE, on Saturday night (23), confirmed everything I had said about the accident in the San José Mine:

"The president of the Central United Workers for the region of Copiapo, Javier Castillo, assured today that the Government knew of the risks that existed at the San José mine where 33 miners were trapped for 70 days.

"We had a meeting with Minister of Labour, Camila Merino, and spoke of the risks of this mine and that despite the very large number of accidents, deaths and collapses, they were always balancing the fact of keeping jobs at the expense of the lives of workers," Castillo said.

"This was spoken about with minister Merino," emphasized the union leader (...), stressing that the authorities were informed about the risk of the mine before the accident." Castillo said that on the same day of the meeting, July 1, the workers also warned the Minister of Mining, Laurence Golborne, on the irregularities, and that on July 5, after the accident with Gino Cortes, who lost a leg in the mine, tried to talk again with Golborne, but he did not receive them. "The leader of the Central office in Copiapo said the last time he tried to talk to the minister, they were received only by the secretary of Golborne.

"We gave her the details about the accident and said that it was urgent and necessary to take measures in the San Esteban company, which owns the San Jose mine, as they were beginning to repeat cycles of danger, and she made a note," he added.

"Castillo said that all these records were already reported to the Commission of the Chamber of Deputies that investigates the causes and responsibilities for the accident with the 33 miners."