France on the brink of collapse 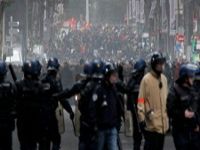 In the fight against threats to security, France on the brink of collapse. France responds with its claims and traditions and there are already nine summonses to strike facing the government of President Sarkozy this year, in response to his plans for the hardening of labor regulations.

The latter, in progress since last October 12, was joined by a crowd of sectors and has since renewed every 24 hours with no expiry date set. Students will also occupy the streets, and every time they hear more comments there is a risk of a new May of 1968. The lack of fuel at petrol stations is contributing to the paralysis of the country. These are the keys to understanding a complex and massive strike.

Since when is this strike in progress?

Since last October 12, since the labor unions held the seventh strike against Sarkozy's government this year. That day the rally held was more multitudinous than this year in France: 1,230,000 spectators, according to police, over three million according to organizers.

How long will it last?

Because of its peculiarity of being renewable every 24 hours, it is difficult to determine. For now, it is anticipated that the strikes will continue at least until the 19th, when the unions called for mobilizations that suppose the ninth round of work stoppage this year (and falls on Thursday).

What does the strike claim as its purpose?

The withdrawal of a bill by the government of Nicolas Sarkozy, which currently is being debated in the Senate the purpose of which is to delay the legal retirement age from 60 to 62 years old, and the age to which a worker should retire who has not paid the necessary time to collect the entire pension, from 65 to 67 years.

What sectors does it affect?

For the time being transport, refineries (sector of higher pressure), education (secondary students joined last week) and truckers. The difference from previous strikes, this is by sectors and regions, and renewable indefinitely.

What margin does France have to reach a situation of destabilisation due to work stoppage in the refineries?

According to the unions, the 12 refineries in the country are on strike and have problems with supplies of crude. Ten of them plan to completely halt production. The Government gave the green light to use the oil reserves that are required to be maintained by law, which assume that between 10 and 12 days more than the supply. This period may vary depending on consumption, which increased 50% last week. Many French, forecasting and anticipating, hoarded fuel. The government oil reserves, capable to supply France for 90 days, have not yet been exhausted.

Prime Minister Francois Fillon, warned that in no case will this situation produce shortages of fuel.

What was the impact of the student mobilization?

According to the Ministry of Education of France, on Thursday there were 340 institutes affected by work stoppage and mobilizations; student unions reported that the incidence was 500. Altogether there are around 3,400 learning centers in France.

Why be preoccupied about the government of Nicolas Sarkozy and its accession to the striking students?

The government fears that the mobilizations will radicalize student participation. The mobilizations of teenagers on Thursday caused several incidents and injuries in many cities of France. Sarkozy did not forget, furthermore, the student protests of 2006, which forced the government of Dominique de Villepin to withdraw a controversial law of labor employment. Villepin declared on Tuesday evening on French television: "We must draw lessons from experience." The riots of May 1968 also remain in everyone's mind.

Was there a clear reaction by Sarkozy to the strike?

For now, none. The French President declared that he will follow "up to the end" with the controversial pension law, which he considers "social justice" and added: "What would happen if we didn't have the money to pay the pensions of the poorer retirees?" Sarkozy made clear he will not "grant any more concessions." This refers to the modifications introduced in the bill on the 8th of October that it would soften some provisions, but did not touch the core of the writing: the extension of working life to obtain a pension.