Dementor caught on video throwing garbage out of window 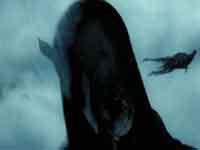 Gruesome footage from a recent TV show at one of the central channels shocked the viewers: residents of a high-rise apartment building had to call the police to rein in a lonely old woman who developed a habit of throwing garbage and human waste out of her window. Sometimes the trash fell directly on the heads of passers-by.

When police officers entered the lady's apartment, they saw a wild picture: the old woman's apartment was inundated with a variety of rotting trash almost up to the ceiling.

The source of a terrible smell in the stairwell became clear. What was not clear is what to do with the old lady apparently suffering from dementia. In the end, the neighbors in some ingenious ways managed to persuade her to voluntarily move to a home for the elderly. The problem was solved. According to the neighbors, they were not angry with the poor lonely old lady. They were sorry for her, and understandably so. Even those who fell victim of her garbage falling on their heads felt sorry for her.

A recent story that occurred in St. Petersburg also makes you feel sorry for old people who lost mental clarity with age. Alas, according to medical statistics, the number of partially or completely mental elderly (over 75 years old) in Russia is enormous, up to 10 percent. And the science does not know exactly how to effectively help these people.

Back to the incident that occurred the other day in St. Petersburg. A family who moved into a new apartment found themselves faced with a problem, "MK in St. Petersburg" reported. Almost every morning the door of their home was smeared with something sticky and fragrant: jam, pickled peppers in oil, marinated mushrooms - generally, home-made canned goods.

They received no assistance at the police station where they filed a complaint since the police could not put a guard at their door. In addition, the door was not on fire, was not broken, and nothing threatened the lives of the tenants. Plus, the fact that they had to wash the stairwell and the door every morning only kept the entryway clean.

The tenants failed to hunt the"food bully" down, and sabotage continued. Finally, they had to buy a video camera. The bully was a harmless-looking old woman who lived in a communal flat downstairs. She had no particular reasons for her behavior. The videotape clearly captured the face of the lady.

The residents had tried to talk to the lonely old lady, but she flatly refused to speak. Her neighbors in the communal apartment told that, apparently, she has been suffering from dementia for a long time, but was usually quiet and not dangerous. She had a habit of canning mushrooms, peppers and other stuff, but had nobody to eat it.

In general, the finale of this unusual story is good. Once tracked down, the old lady stopped the bullying. They say now, instead of smearing the door, she treats her neighbors with pickles.  Despite the happy end, the story makes you think. Millions of elderly people, left alone, live rather miserable lives. And it is not always economically hard: after all, they do not starve. They have another problem: loneliness that makes them lose their minds. Think about it and call your elderly parents, visit your grandmother, come in for a cup of tea to an elderly neighbor or invite her to visit. Believe me, they are dreaming about it.